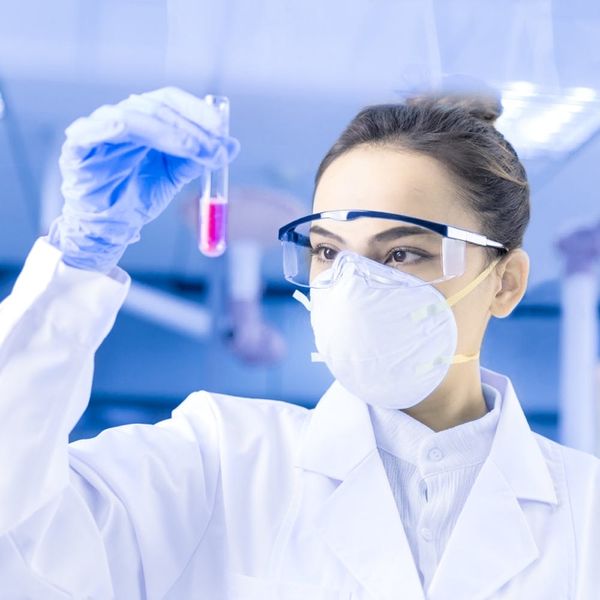 When my mom got breast cancer at age 60, it was difficult news, but it didn’t come as that huge of a shock. After all, she was getting older, and one in eight American women will suffer from breast cancer in their lifetime. But when another, younger family member was also diagnosed only a couple of years later, it began to seem like something a bit more sinister might be going on — something hidden behind the scenes of my family’s genetic makeup.

My mom went for genetic testing, and, sure enough, got the news that she carries the infamous breast-cancer-causing BRCA gene, made famous by Angelina Jolie and her much-publicized preventative surgeries. Other members of my family began to get tested too, and our inherited 50/50 odds played their way out through my aunts, uncles, and cousins. Exactly half of them discovered they carry the gene.

I wanted to know my risk too, but despite my usual tendency toward health anxiety (and a general desire for control), I didn’t pursue testing all that aggressively. I figured I’d get serious about it when I got older and my age increased my breast cancer risk. As time went by, I became the sole untested member my extended family — a question mark, a flip of a coin — while I watched others jump through insurance hoops and undergo surgeries.

My laissez-faire attitude didn’t only have to do with a wait-and-see approach. I did actually try to get genetic testing. Every time I made the effort, however, I was rebuffed. Phone calls to a genetics practice went unanswered. Then I was told one geneticist only worked with children, another didn’t accept my insurance, and still another had left the practice entirely. Back to square one, I decided to contact my insurance company for another referral. While waiting for an answer, my husband spoke with his HR director, who told him that, with our plan, we should expect to pay about $3,000 for testing. I wasn’t about to fork over that amount of cash for a simple blood test.

Years went by. I switched to a new doctor, who assured me she could do the test in-house. Insurance denied it (and in the process so much time went by that my blood sample was rendered unusable). Finally, I heard from a friend that a local cancer center offered out-of-network genetic testing and counseling for $250. I made an appointment.

One day, as the appointment date approached, I was texting with my sister-in-law about the whole laborious process of hunting down genetic testing. “Have you heard of this?” she asked, and shot me a link to an online genetic testing company called Color. Curious, I clicked.

The Color website was clean, user-friendly, and, best of all, full of assurances that I could discover any mutations in my genetic makeup using their medical-grade send-away kit. My results would be sent to my doctor’s office, just as if the test had been performed in any in-network lab. I could choose from three options: a test that detects 30 inherited genes related to cancer, a hereditary high cholesterol test, or the BRCA test by itself. Was this too good to be true? Had a simple Google search turned up in minutes something that took me years to track down?

I was about to find out. I canceled my appointment at the cancer center and ordered a Color kit.

Since I wanted a one-and-done testing experience, I chose the 30-gene package (which, at the time, was on sale for $169 — currently, it’s $249). The purchasing process included answering numerous questions about what I knew of my family’s health history and which family members carry mutated genes. I didn’t mind parting with any of this information to help Color better research the science behind cancer prevention.

Within about a week, a trim little package arrived, small enough to fit in my standard-size mailbox. Unpacking the white box inside felt like opening the weirdest present ever. (“Surprise! It’s your cancer risk!”) The contents were few: a test tube and instructions for use. All I had to do, the instructions said, was spit into the tube enough for my saliva to reach a “fill” line, then pop a twistable cap on top. Certainly less painless than missing a morning of work to drive 30 miles to the cancer center for a blood test, as I had originally planned.

Dutifully, I massaged my cheeks (the instructions said this would stimulate the salivary glands), produced enough saliva to fill the tube, and capped it. Then I returned it to the box, which was self-addressed to Color’s headquarters, and put it back in my mailbox for pickup. Simple as that.

I won’t lie: The wait for my results seemed to drag on. I’d always known my risk of an inherited mutation was 50 percent, but knowing the moment of truth was near heightened my sense of anticipation and anxiety. After about a month, I received an email saying my results were ready. I could schedule a phone call with a geneticist at my convenience. I booked the earliest possible time.

Angela, the geneticist who called, was warm and personable, and she got right down to business. She directed me to log in to my Color account so we could view my results together. The news wasn’t great, but Angela delivered it as compassionately as possible. I do have the BRCA-2 gene, she said, which means my lifetime risk for breast cancer is 74 percent. In the half-hour conversation that followed, she walked me through several bar graphs indicating my risks over time. She explained recommendations and potential options for early detection and prevention. And she even offered the silver linings that no other mutations were detected, and that the BRCA-2 gene carries less risk than BRCA-1. All in all, by the time we hung up, my questions were answered.

Since my phone consultation, I’ve received numerous follow-up emails from Color, checking in to make sure I have no further concerns. I can also access my test results at any time by logging in to my Color account.

I haven’t decided whether I’ll undergo preventative surgeries or try any of the new cancer prevention drugs on the market. But now that I know my risks, I do feel prepared to make those decisions in my own good time. After all the frustration of chasing genetic testing the conventional way, it astounds me that such a simple, convenient, and inexpensive solution was only a few clicks away. It’s been an eye-opening journey — and a good reminder that sometimes the best advocate for my health is me.

Would you get genetic testing done — or have you already? Share your thoughts and experiences with us on Twitter @BritandCo.

Sarah Garone
Sarah Garone is a mom, wife, nutritionist, and freelance writer in Mesa, AZ. She loves music and travel, speaks fluent German, and does a lot of running (to counterbalance the surprising amount of cookies she eats for being a nutritionist). Find her sharing great recipes and helpful nutrition info at A Love Letter to Food.
Healthy Living
Health
Healthy Living Science Self Womens Health
More From Health