5 Things I Learned About Love from Harry Potter 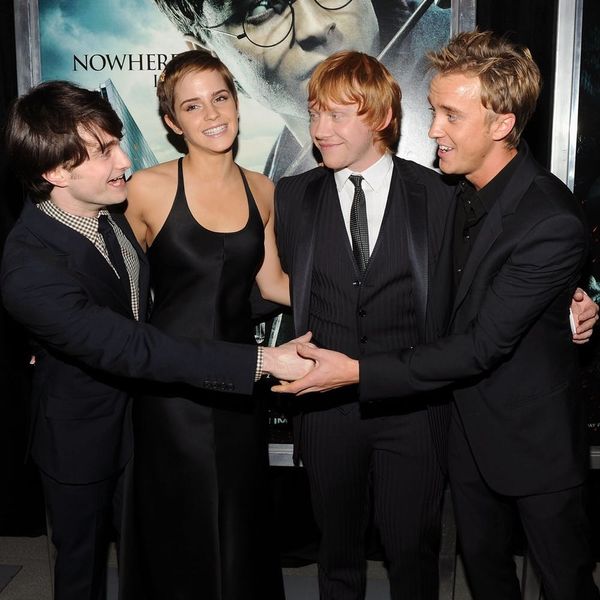 I have a nerdy confession. When I was applying to college, I wrote my Common Application essay about Harry Potter. Dumbledore, to be specific. Don’t worry, I didn’t claim he was my personal hero or anything too dramatic. One of the essay prompts was: “Describe a character in fiction, an historical figure or a creative work that has had an influence on you, and explain that influence.” The sixth book in the HP series, The Half-Blood Prince, had just come out that summer, and I was rocked by the events of the last few chapters. (No spoilers, but it’s been 10 years since the book came out, sooo…) I wrote about my devastation, my indignation and my feeeeeeelings. I loved Dumbledore! I loved the books!

But like most teenagers, I also knew very little about what that word “love” actually meant. Like Harry, I took for granted that it was his secret weapon against Voldemort. (“So, when the prophecy says that I’ll have ‘power the Dark Lord knows not’, it just means love?” asked Harry, feeling a little let down.” Tell me about it, dude.) 10 years later, with some grown-up hindsight, I’ve come to realize that there are some major life lessons hidden in those pages. Maybe this is what they were teaching in Muggle Studies.

1. Love can’t be forced. Early on in the series, Harry overhears Mrs. Weasley laughing about a love potion she once tried to make. But in later years, we learn of the ill effects of forcing love. Ron’s bad turn with Romilda Vane’s potion is one example, but it’s Merope Gaunt’s use of it on Tom Riddle, Sr. that’s really sinister. It’s under the influence of a love potion that He Who Must Not Be Named is conceived, and we all know how THAT turned out. In a world without magic, you can’t coerce somebody into loving you — and the lesson here is, perhaps it’s better that way.

2. Platonic love is real. J.K. Rowling herself said recently that logically, Hermione should have ended up with Harry. But with all due respect to the author, what does logic have to do with love? Sure, everyone had their suspicions about “Harmione,” Cho Chang being one of the first to suspect something. Ron began obsessing over Harry and Hermione spending all that time together in the woods, and Voldemort’s Horcrux manipulated that fear. But without attraction, love is just platonic love. Cynics can say whatever they want about men and women just being friends, but straight from the horse’s mouth: “I love her like a sister and I reckon she feels the same way about me. It’s always been like that.”

3. Love takes sacrifice. There are always elements of give and take in healthy relationships. In normal Muggle life, that usually translates into small, everyday compromises. But HP prepared us for the greater sacrifices we sometimes make for the ones we love. It’s there from the very beginning, with James sacrificing himself for Lily and then Lily for Harry. It’s there when Snape turns into a double agent. And most significantly, it’s there when Harry willingly gives himself up for the rest of wizard-kind. Aaaaand cue the waterworks.

4. Love hurts. For many of us, this was a lesson life doled out way too quickly, so maybe you didn’t need HP to deliver it too. But still, you’ll find the pain of love alllll over the series. We had unrequited love (Snape and Lily Potter), reluctant love (Tonks and Lupin) and broken love (Harry and Ginny round one). There were loves that ended in battle (Dumbledore and Grindelwald), loves lost too soon (Cho and Cedric) and loves that took way, way too long (Ron and Hermione). Sigh. Guess even wizards aren’t immune to heartache.

5. Nothing is greater than a mother’s love. Of course, the most important love of the whole series — the one responsible for legacy of The Boy Who Lived — is that of a mother and son. Lily Potter died for Harry, and as Dumbledore explains again and again, that protection is more powerful than any dark magic. JKR even bookmarks the story with Molly Weasley killing Bellatrix Lestrange to save Ginny, saying, “Not my daughter, you bitch!” BOOM. As any child out there will assert: You do NOT eff with a mother’s love.

What moments from the series stand out to you? Tweet your HP memories to us @Britandco!

Molly Griffin
Molly is a writer and editor from Boston who loves traveling, eating and occasionally being a little too candid. She lived in Dublin, Ireland for the last four years but recently moved to San Francisco to escape the rain. Now, she’s on the lookout for a good proper pub.
Relationships
More From Relationships