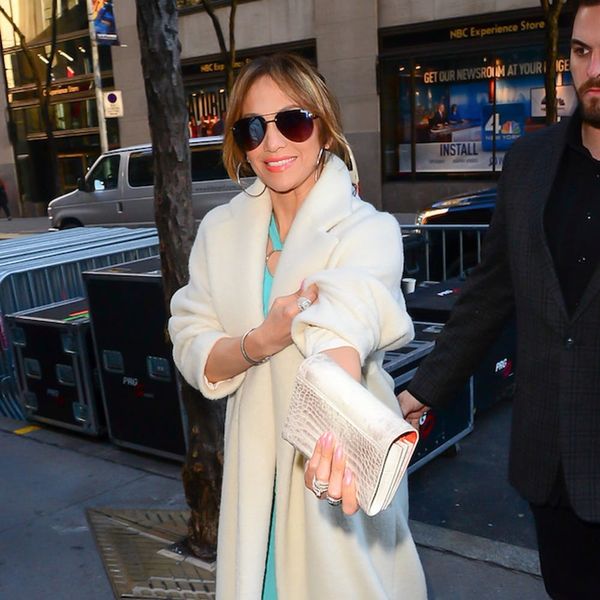 You know, it’s hard out here for an actress on a press tour promoting the second season of her show. Case in point, Jennifer Lopez is working hard as heck on a press tour for season two of Shades on Blue, Lopez’s NBC show where she stars as a single-mother NYPD detective. In fact, the job called for J.Lo to wear not one but five designer outfits in a single day.

1. Look #1: Let’s see: First, there was the Lilly e Violetta striped collarless rabbit fur coat and Christian Louboutin heels she wore to The View studios. She complemented her look with a fun, peach-colored lip.

2.Look #2: Then, for an appearance on Live With Kelly, she changed into a Yves Saint Laurent metallic pussybow blouse and skirt, with a silver studded Jenny Packham coat to finish off the look. She also swept her ponytail up into a messy bun.

3. Look #3: Next, she wore a Yanina Couture white lace blouse and black skirt for another stop at Live With Kelly. We’re getting some Selena Quintanilla-vibes from those ruffled sleeves + mini skirt combo.

5. Look #5: Finally, Jennifer capped her night (and designer-studded press tour) in a brown tan plaid Sophie Theallet jumpsuit in a dance off with Jimmy Fallon. She kept the half-pony from her last look, but added a va-va-voom burgundy lippie. Yowza!