Is Canada’s Justin Trudeau Turning Trump into a Feminist President? 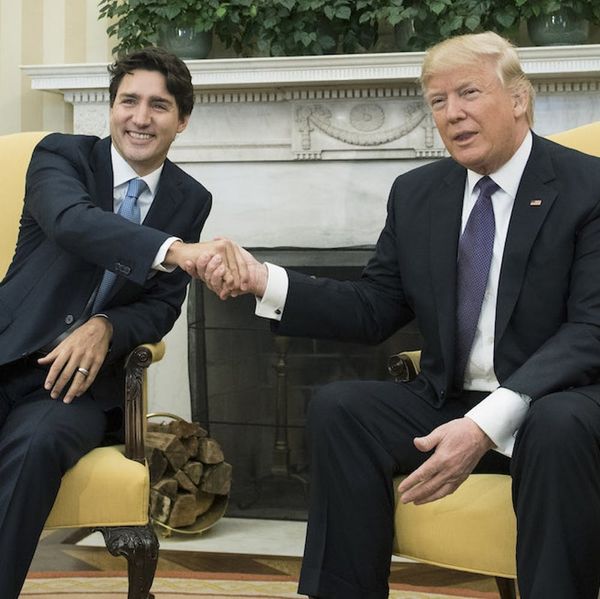 Canada’s Prime Minister Justin Trudeau has a pretty great rep when it comes to advocating for women’s rights. On countless occasions, Trudeau has spoken out about the importance of creating a community that understands and values women. At last year’s UN Women’s Conference he told the audience, “I’m going to keep saying, loud and clearly, that I am a feminist until it is met with a shrug. It shouldn’t be something that creates a reaction.” He’s even flat-out tweeted, “I am a feminist. I’m proud to be a feminist.”

President Trump’s Twitter account tells a different tale. Whether he’s dismissing reporter Megyn Kelly as “so average in every way” or calling Arianna Huffington “unattractive both inside and out,” it’s clear there are major differences between how the two political leaders interact with the opposite sex.

And so, when the two met for the first time yesterday, there was a palpable sense of curiosity about how that interaction would go down, especially since Trudeau and President Obama shared what looked like a serious bromance. During Trudeau’s first visit to the White House since Trump’s administration took over, the two shook hands and discussed major issues like trade and immigration. But in a surprising turn of events, a major part of the day was also spent discussing women in the workplace.

President Trump, his daughter Ivanka Trump, Justin Trudeau and several female CEOs and business leaders (from both the US and Canada) were all present at a roundtable meeting where a new task force was formally introduced: The United States Canada Council for the Advancement of Women Business Leaders-Female Entrepreneurs. Despite the complicated name, the council’s goals are simple. According to a joint statement from the two leaders, it aims to “promote the growth of women-owned enterprises.”

During the meeting, Trump told attendees, “Women are the primary source of income in 40 percent of American households, and households with children under the age of 18. In order to create economic growth and lots of very good, well-paying jobs, we must ensure that our economy is a place where women can work and thrive and I think that’s happening in the United States much more so…. We need policies that help to keep women in the workforce and to address the unique barriers faced by female entrepreneurs. And they are unique.””

This is a great sentiment and all — and arguably the most progressive move Trump has made since being sworn in as president — but there needs to be some sustenance to these sorts of statements from Trump. Abolishing healthcare for women who rely on the ACA isn’t going to help women “thrive.” Demeaning prominent female reporters and personalities publicly via Twitter also isn’t sending that kind of message. And creating a cabinet with only four females out of 16 also isn’t doing anything to add credibility behind this new initiative.

Trump’s certainly not anywhere near “woke bae” levels just yet. But perhaps our next door neighbor (and its prime minister’s 50 percent female cabinet) can help the president create policies and reforms that don’t send millions of women into the streets in protest.

Cortney Clift
Cortney is the senior writer and special projects editor at Brit + Co. She typically covers topics related to women's issues, politics, and lifestyle. When she's not buried behind her computer you'll find her exploring New York City or planning her next big adventure.
Feminism
Politics
Feminism Politics
More From Politics