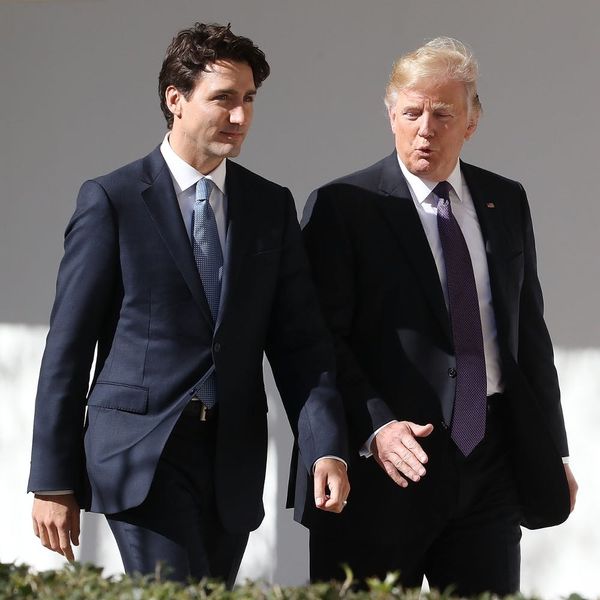 Donald Trump’s presidency hasn’t exactly been a smooth ride thus far, if the historic Women’s March, fallout over his travel ban and his Nordstrom feud are any indication, but his visit with Canadian Prime Minister Justin Trudeau today was truly awkward AF. While people have long pointed out the differences between the two (such as the PM’s ability to fluently switch between English and French, as well as his welcoming stance toward Syrian refugees), some people can’t help but notice that the duo’s differences were summed up in one pic where Prime Minister Trudeau threw (unintentional?) shade at President Trump. Obvs, peeps are FLIPPING OUT!

Sitting down for the routine handshake photo-op at the White House, there was a moment that may have IRL been totally brief, but because of its epicness, will now live on forever as the symbol for the entire sitch.

While President Trump extended his hand towards Prime Minister Trudeau for a handshake, the Canadian leader hesitated while looking down at the US leader’s hand, with a, er, less-than-impressed expression on his face.

The internet, natch, was ALL over it…

Trump: I dare you to tell me that that's orange, go on…
Trudeau: …well it's not not orange?
Trump: I'm suing Canada, you're fired. pic.twitter.com/aOVl8ptQG1

Justin Trudeau looking at Trump like, "I read about that dossier, I ain't touchin' you" pic.twitter.com/bQgs8MPlhW

Of course, others were less amused:

What interesting times we live in.

What did you think about this pic of Trudeau and Trump’s meeting? Tweet us @BritandCo!