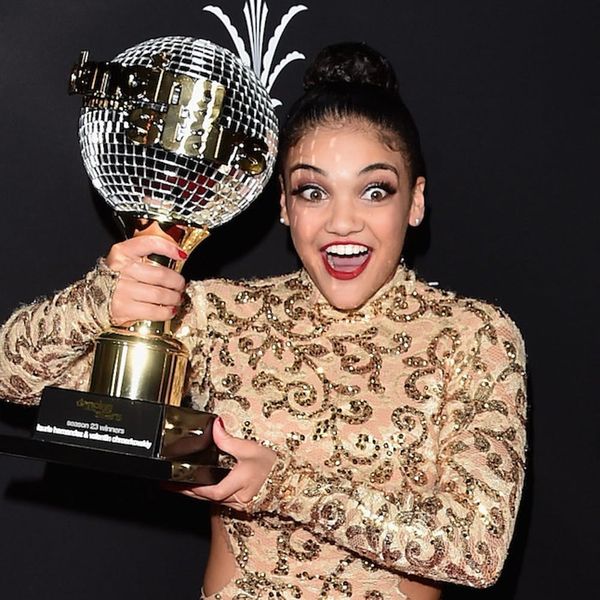 From a win worth celebrating to more bad news from Bieber, check out six of the top news items you missed while sleeping, below.

1. Is it just us, or do you find you really appreciate the small nice things so much more these days? Last night, America’s sweetheart Laurie Hernandez gained a Dancing With the Stars trophy to display alongside her Olympic gold medals, and honestly, we couldn’t be happier. From her beaming energy to her emotional triumphs throughout the show, she couldn’t have deserved it more. The expression on her face when she found out she won is all of us. Congrats, Laurie!!

2. Whoa — Justin Bieber punched a teenage fan in the face. Just when we thought Justin couldn’t do anything to hurt his fans more, he goes and surprises us. In a video obtained by — you guessed it, TMZ — Justin is seen to apparently reach out and clock the fan who was trying to reach in and touch Biebs through the open car window. Which, maybe fair, TBH? The fan can then be seen touching his mouth to reveal a bloody lip. Oh, Justin.

Happy to announce the addition to our family Lyla James. Baby and mom are both doing great! #BabyLambton @peytonwlambton #imadad

3. It’s another Bachelor Baby! Bachelor alum Chris Lambton and his wife Peyton announced the arrival of sweet little Lyla James last night on Instagram, and they couldn’t look happier. “Happy to announce the addition to our family Lyla James,” Chris wrote. “Baby and mom are both doing great!” According to People, Lyla was born on Saturday, and the pair picked her first and middle names for personal reasons. “Lyla means beautiful island girl, and being from Cape Cod and that she is beautiful, we thought it was perfect. Her middle name James is named after both our father’s first names.” Awww. Congrats!

Even in her final moments Jo Cox’s thoughts were for others. Today extremist Thomas Mair was found guilty of her murder. pic.twitter.com/mwfHKUNViN

4. Thomas Mair has been found guilty of murdering Labour MP Jo Cox. The British Labour Party Member of Parliament was killed viciously and senselessly in June, and Mair, a white supremacist, was given a full life sentence for what the judge described as a pre-meditated attack “designed to advance the cause of violent white nationalism.” (h/t Buzzfeed)

5. The FBI has closed their case on Brad Pitt’s child abuse investigation. After word got out about Brad and Angelina’s divorce, details about an alleged argument that got physical between Brad and his son Maddox while on a private plan emerged. It was concluded that Brad would not be charged. “In response to allegations made following a flight within the special aircraft jurisdiction of the United States which landed in Los Angeles carrying Mr. Brad Pitt and his children, the FBI has conducted a review of the circumstances and will not pursue further investigation,” the FBI said in a statement. “No charges have been filed in this matter.” How or if this will affect Brad and Angelina’s custody arrangement remains to be seen. (Photo via Jason Merritt/Getty)

6. Quote of the day: “Be thankful for what you have; you’ll end up having more. If you concentrate on what you don’t have, you will never, ever have enough.” Wise words to remember from Oprah Winfrey on this Thanksgiving week.

What are your Thanksgiving plans? Let us know know over @BritandCo.