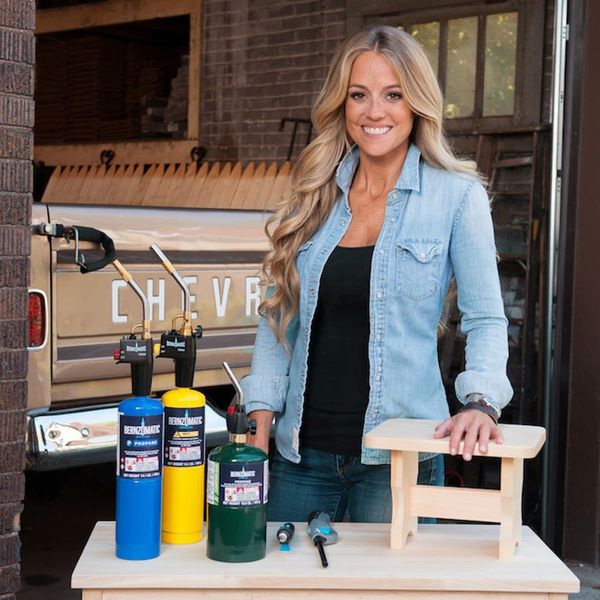 What were you doing when you were 18? Most of us were probably carpooling with our friends to the mall or movies, maybe making some cash working part-time somewhere paying minimum wage (respect) and generally just being a teenager. Not Nicole Curtis. Sure, she’s now the star of HGTV’s Rehab Addict and a total #girlboss. And it’s clear to see that her ambition was with her right from the start. At 18, she bought and started renovating her first house.

“It was in Tampa, Florida. I decided that my carport looked like the dining room waiting to happen, so I simply thought you take out a wall, you put up two walls and you have a dining room — but I didn’t weigh in HVAC, I didn’t weight in electrical, I didn’t weigh in framing, I didn’t weigh in how to hang a door. I knew absolutely nothing. I just thought I could tear the wall out and everything would follow,” Nicole tells us. “It was a long time ago. I can’t even remember being 18, but people always assume they can jump right in and become a contractor or become somebody who flips homes and does this and does that,” she laughs. “But it’s like no, I have a lot of experience underneath my belt and there are still a lot things that are challenging for me. It’s not that easy and anything that’s easy is not worth having anyhow.”

When it comes to renovation, the task is often daunting. Without experience, you often don’t know where to start. We asked her what sort first time DIYers could fix in their own homes and she said, “I always say try it first before you hire it out. If you are horrible at it, you’re going to know really fast. A lot of things, I’m still horrible at or I just don’t enjoy.” Nicole has learned from enough experience to know when there are jobs that are simple but she’d rather just outsource. “People always think, ‘I’m going to paint my apartment’ or ‘I’m going to paint my house.’ Because it’s the cheapest in their mind because a gallon of paint is cheap,” she tells us, “but that’s one of those things where I’m painting a wall and I’m like, ‘Why am I painting?’ There’s no enjoyment for me. But for me, rebuilding an entire house, I’m like, ‘Yes, I’ll do it! I don’t want to paint though.’ So really, it’s tackle anything.”

However, don’t attempt EVERYTHING on your own. “If it’s going to kill you, don’t do it, leave that to a licensed professional,” Nicole is quick to add. “Or if it requires a license, you have to check with your city. Your electrical service, that will kill you. Don’t do it. But something simple like changing a light fixture, you can do that. Easy stuff like that. That’s the only way I learned, it was by trying everything.”

Nowadays, Nicole is a major player in the home restoration world, but deep down, she’s still that 18-year-old girl in Tampa who taught herself how to build homes. “The biggest thing for me is that in all these years, I’ve still stayed the same person, it’s still the same idea I go into every house, I’m not afraid to learn, I’m not afraid to admit that I don’t know and I’m not afraid to make mistakes,” she says.

She still walks into every house asking questions like, “I’m Nicole. I’m a homeowner. How are you? Tell me how long have you lived here?'” she tells us. And helping people rebuild their homes is still at the root of who she is. Nicole recently teamed up with handheld blowtorch company Bernzomatic for a contest called “Find Your Fire” that gives a total of $40,ooo in grants to the winners to rebuild their communities. You can submit your contest entry on the Bernzomatic site along with up to 1000 words for an essay and a photo. “Cute picture, I mean, you’re selling to America,” Nicole advises. “Everyone’s going to vote on it, so you have to be creative on it.” And yes, since her name is on it, she will actually see all the entries. “I’m seeing all the entries come in just because I’m super nosy,” she self-deprecatingly jokes. “I’m super involved because this is something I know is going to make a huge difference.”

“I love helping others and it’s not like, ‘I love helping others. I donated $5 into the red bucket at the mall at Christmas.’ That’s why it’s so important to do these community grants, this is what I work on every single day,” she says. “Those are the things that I have to offer right now that are easy for me to do. I go fix problems I can fix.”

What do you think of Nicole’s advice? Tell us in the comments below!

Kimberly Wang
Kimberly Wang writes about all things pop culture, tech, style, and beauty. She's a Bay Area transplant and has an MFA in Creative Writing from Columbia University. On a sunny New York day, you can find her hanging out with her mini schnauzer Isabelle Jellybean on a blanket in Central Park.
Girlboss
Home Decor Inspo
Girlboss