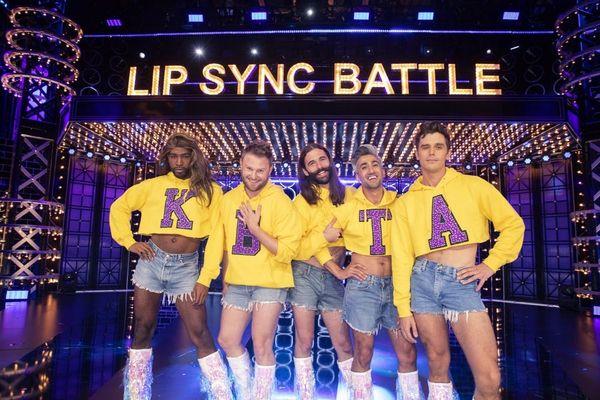 Queen Bey would be proud! Queer Eye‘s Fab Five are set to take the stage during the Thursday, January 17, episode of Lip Sync Battle, and judging by this new preview of Jonathan Van Ness and Karamo Brown slaying “Telephone” by Lady Gaga and Beyoncé, it’s going to be a must-see performance.

Van Ness looks fierce AF in his Gaga-esque outfit, which matches her music video look right down to the studded leather jacket, black corset, ripped pantyhose, and soda-can curlers. And Brown is a pretty good Beyoncé stand-in with his flashy jacket, denim cutoffs, and full-length wig.

Even host Chrissy Teigen, who took a few beats to rock out as the DJ, has nothing but praise for the pair. “That was theater! That was gorgeous!” she exclaims.

The whole spectacle is even more impressive given that Brown had never worn heels prior to their dress rehearsal. “This is my first time — yesterday — in heels ever. And I’m starting in stiletto,” he quips as he struts across the stage.

Van Ness took to Instagram last week to promote the performance, and to give a little insight into his teammate’s experience. (He and Brown are up against Tan France, Antoni Porowski, and Bobby Berk.) “I have never been more excited for anyone to see anything henny,” he captioned a photo of the Fab Five in cropped yellow sweatshirts. “Baby @karamo hasn’t been the same since he met this wig & my life has forever been changed for the better.”

The preview also offers a glimpse at Porowski, Berk, and France channeling different versions of Britney Spears from “Toxic,” “Oops!… I Did It Again,” and “Circus.”

You can see both performances on Lip Sync Battle this Thursday, January 17, at 9pm ET/PT on Paramount Network.