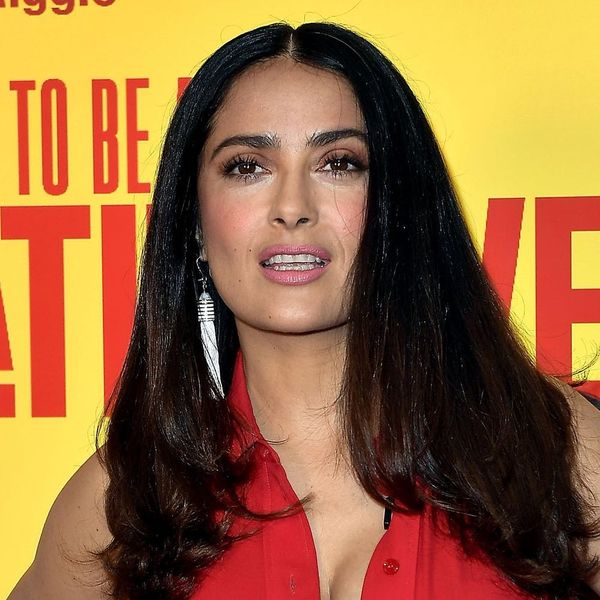 The 2017 Cannes Film Festival is just full of surprises this year! Kendall Jenner wore socks on the red carpet and Pamela Anderson debuted an elegant makeunder. Now, Salma Hayek is veering into uncharted hair territory by ditching her signature raven hair for a shocking new color.

The How to Be a Latin Lover star attended Kerig’s Women in Motion film event on Sunday night in a sheer black Gucci gown with floral accents. It wasn’t her dress that had us doing a double take, however, but her ‘do. Hayek posted a pic of herself in the backseat of a car yesterday sporting a pink hair color in glam old Hollywood waves.

It was a fresh and fun look for the star, who tends to take the safe route when it comes to her hair. Though Hayek has played around with length and style, going from straight to curly, crimped, and back again, she tends to stay on the darker side of the color wheel.

Hayek, who married François-Henri Pinault in 2009, had her raven locks as recently as Saturday night, which leads us to assume the new cotton-candy locks is just a wig.

Between this and her pal Penélope Cruz’s change-up for her role as Donatella Versace, it’s shaping up to be a wild summer for hair color, indeed!

What do you think of Salma’s new ‘do? Let us know over @BritandCo.

Nicole Briese
Nicole is the weekend editor for Brit + Co who loves bringing you all the latest buzz. When she's not busy typing away into the wee hours, you can usually find her canoodling with her fur babies, rooting around in a bookstore, or rocking out at a concert of some sort (Guns N' Roses forever!). Check out all her latest musings and past work at nicolebjean.com.
Celebrity Hair
Hair
Celebrity Hair Hair Color
More From Hair