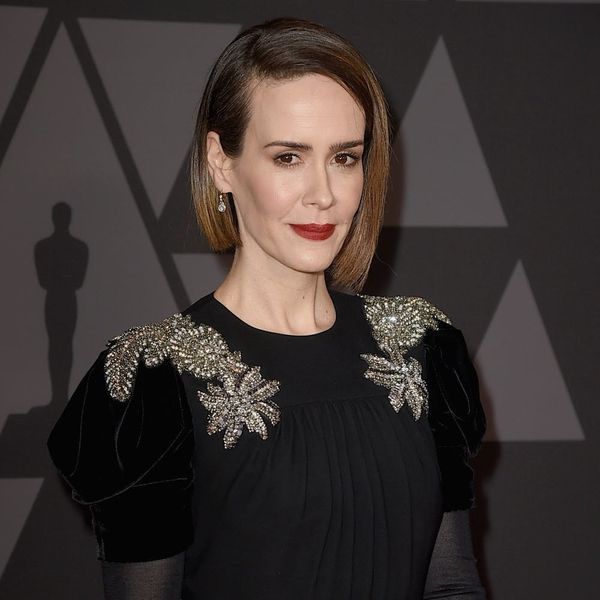 Making a cameo in Ocean’s Eight may have cost Olivia Munn money, but we’re sure it was worth it to get the chance to hang out with the superstar group of women — Sandra Bullock, Anne Hathaway, Cate Blanchett, Mindy Kaling, Helena Bonham Carter, Sarah Paulson, Rihanna, and Awkwafina — who make up the movie’s cast. What would make it even better is if Munn could wiggle her way into what sounds like the most amazing group text EVER.

“I’m not going to lie, it is a very cool chain to be part of,” Paulson said while sitting down for a new interview with The Edit. The stars don’t chat every day, but when they do, they go all in. “We can go weeks without a chirp, then someone sends one message, and it’s like — ‘brp, brp, brp’ — your phone just blows up for hours.”

This isn’t the first time the 42-year-old has let us in on insider details regarding the text conversations among the group. She told Entertainment Tonight back in January, “We’re all texting each other, making a plan for this dinner that we’re having in New York. But the things that are going on in this text chain, you would lose your mind.” Yeah, we have no doubt about that.

While we may never know the mind-blowing things these ladies text each other, we’re excited to see them on screen together in Ocean’s Eight, the all-female installment of the popular Ocean’s Eleven franchise that starred George Clooney, Brad Pitt, Matt Damon, Julia Roberts, and a stellar ensemble of other actors.

This time around, the ladies are at the helm as they attempt to steal a necklace from the Met Gala while framing a gallery owner (played by Damien Lewis) for the crime.

Do you have a group chat with your friends? Tag them @BritandCo!