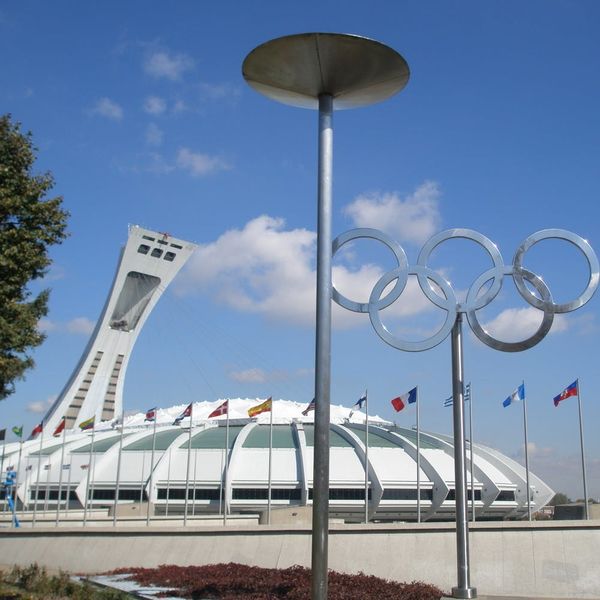 When we talk about refugees or asylum-seekers, we usually think about people entering the country. But since the Trump Administration took office, thousands have fled on foot from the United States and into Canada, echoing Moira’s escape on The Handmaid’s Tale. With nowhere to house the latest wave of migrants from the US, the famous Olympic Stadium in Montreal, Quebec has just become a de facto shelter.

“We’ve never seen this before,” said Francine Dupuis, spokesperson for PRAIDA, a local governmental organization that helps claimants in their first months when speaking to the CBC. “It’s really quite a bit more intense than what we’re used to.”

How much more intense? Although there are no official numbers, Dupuis estimates that some 1,174 asylum seekers crossed into the province of Quebec in July alone. Compare that with the numbers from one year ago, when the org helped 180 people.

Since the start of 2017, 4,345 people have crossed the US-Canada border seeking help, with over 3,000 entering the province of Quebec specifically.

With anywhere between 100 and 450 beds set up for asylum seekers in the Olympic Stadium, those who get a bed will be housed in the area with concession stands just on the border of the actual arena. It’s a windowless, concrete hallway.

Why the influx to Canada? In May, President Trump threatened to remove protections for Haitian-American refugees who arrived stateside after the island’s catastrophic 2010 earthquake. At the time, President Obama offered those fleeing the devastation emergency status in the US, something that Trump’s administration threatened to revoke by the end of July. Without any clear answers, an estimated 58,000 Haitians in the US could face deportation in January 2018. Because Quebec is a majority French language province with a huge Haitian community, the province is attractive to those fleeing the US.

The Independent notes that Haitians who came to the US after the 2010 earthquake have had their TPS renewed every 18 months or so, but under the President’s desire to end the plan, many families could be torn apart, and it opens the door to expelling other refugee groups.

Haiti is the poorest country in the western hemisphere. Between the 2010 earthquake and Hurricane Mathew in 2016, over 200,000 Haitians were killed by natural disasters and the after effects.

What do think about US refugees heading north? Tell us @BritandCo!