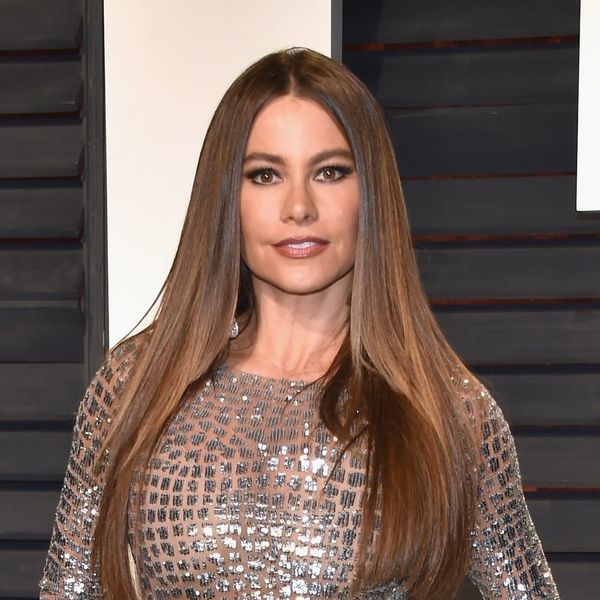 Sofía Vergara has definitely perfected her *look* over the years. Vergara is known for her long, flowing locks and curve-hugging dresses, so we were pretty shocked when the Modern Family actress revealed a major style change on Instagram.

She got bangs! The mother of one (soon to be two!) debuted the switch-up on Insta, posing just so as she snapped a selfie. “New haircut,” she wrote. “Gracias, #KellyKlain!”

Whoa. It’s a huge departure from her last public appearance on June 26, when she attended a launch party for Raze in Los Angeles sporting her signature beachy waves and a tight, mermaid-silhouette minidress. But we dig it!

While Vergara looked undeniably gorgeous with her new fringe, she couldn’t help but have some fun with it too.

In a second snap uploaded last night, she likened herself to Mexican sitcom character La Chilindrina, a mischievous prankster with pigtails, glasses, plenty of freckles, and of course, those straight wispy bangs. LOL! We already knew Vergara was a world class comedian, but it’s good to see she doesn’t take herself too seriously.

What do you think of Sofía’s bangs? Tell us over @BritandCo.

Nicole Briese
Nicole is the weekend editor for Brit + Co who loves bringing you all the latest buzz. When she's not busy typing away into the wee hours, you can usually find her canoodling with her fur babies, rooting around in a bookstore, or rocking out at a concert of some sort (Guns N' Roses forever!). Check out all her latest musings and past work at nicolebjean.com.
Bangs
Hair
Bangs Celebrity Hair
More From Hair