10 Space-Inspired Costumes to Wear This Halloween 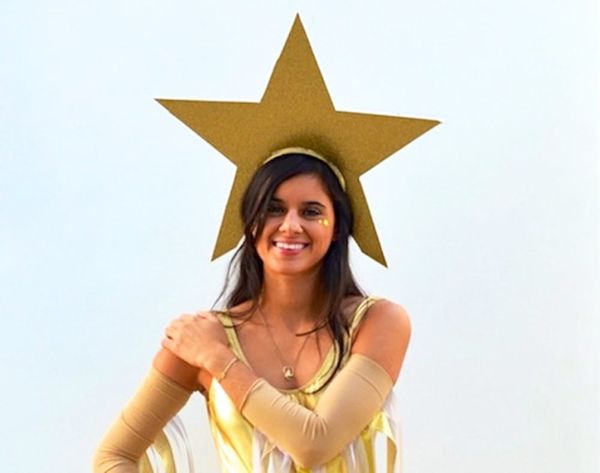 Space is awesome, inspiring and utterly overwhelming. I mean, when you see how small you are in the grand scheme of things, it makes your obsession with finding the exact nail polish to match your dress seem a little less important. And even though one wrong turn could send you into a black hole that’ll suck you up and never spit you out (did y’all see Gravity?!?!), we are still totally obsessed with everything galactic. So this Halloween, if you’re on the hunt for a costume inspired by the beautiful wonder we call space, here are 10 ways to buy or DIY an outfit that’s out of this world.

1. Ms. Frizzle: Be still our beating hearts. Find a crazy space dress, get that hair extra frizzy and spend the evening as everyone’s first and favorite teacher. (via Imgur)

2. Leelo: If you’re going to be an alien this year, Leelo from The 5th Element is definitely the most fashionable choice. There is a little bit of wiggle room as far as which outfit to go with, but the bright orange wig is a non-negotiable. (via Geek x Girls)

3. Star Wars Stormtrooper Costume ($52): With a new Star Wars movie in the works, we’re guessing next Halloween is going to be flooded with characters from the saga. Beat the crowd and go for this figure-flattering, badass look this year.

4. Jane Jetson Costume ($46): The ’60s cartoon may not have been right about the flying cars (yet…), but they sure knew how to dress. This definitely isn’t our everyday attire like the show predicted, but it would certainly make a fun outfit for one night. Go for a group costume with your pals dressed as the Jetson clan or try a last-minute DIY Judy Jetson costume — idea here!

5. Artoo Tutu: If the Stormtrooper getup is too intense for your taste, how about a Star Wars tribute that’s a little more charming? Wait… what’s that… this costume is called Artoo Tutu?!?!? Just imagine how great all those Halloween party introductions are going to be. (via Leeloo the Droid)

6. Zenon and Nebula: This list just wouldn’t be complete without a shoutout to our favorite space-dwelling teen. Find some solid-colored, super shiny clothes to color block for a fun costume idea you can do with your bestie. (via American Apparel)

7. Lumpy Space Princess: This beloved Adventure Time character is angsty, hilarious and totally cute. If you’re looking for a DIY costume, this is an easy choice. Pick up a purple wig (or use hair chalk), grab felt for the yellow star and cloak yourself in as much purple tulle as you can handle. (via Pop Sugar)

8. Sun and Moon Costume: This is pretty much exactly how we would expect Mary-Kate to do Halloween. The best part is, you can make this costume with things you already have in your closet. So long as one half dresses mostly in white and the other half in mostly yellow, you’re all set. Create some kind of headpiece like MK and her friend, just so your costume is clear. (via In the Olsen’s Closet)

9. Shooting Star Costume: All eyes will be on you in this metallic costume (we’re trying really hard to not to say you’ll be the star of the show). This tutorial shows you how to make a star headband out of foam core and a “flaming” tail with white and gold streamers. (via Camille Styles)

10. Tardis Dress: For all those Doctor Who fanatics out there, this one’s for you. Transform yourself into a time-traveling spacecraft with a blue dress and some creativity. Of course you can also go the classic route by decorating a cardboard box and strapping it around your shoulders, but we think this idea is much more comfortable. (via Alice in Ivory)

Is your Halloween costume going to be galactic this year? What are you planning on dressing as?