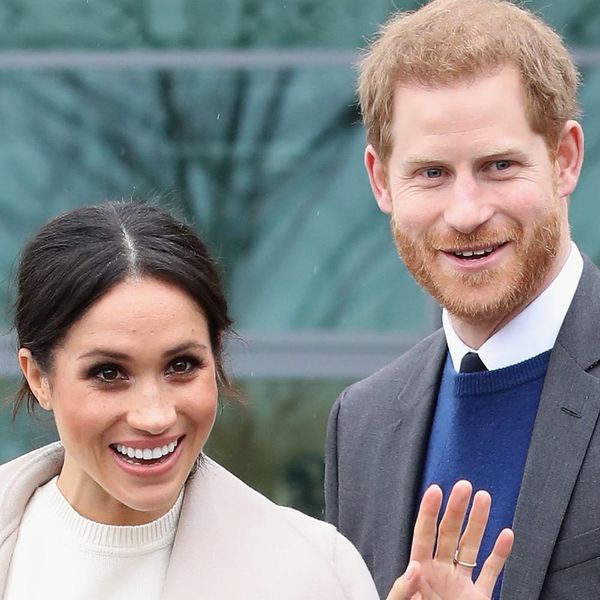 Prince Harry and Meghan Markle have been plenty busy prepping for their May 19 wedding, with Kensington Palace taking us along for the ride as it offers up deets on everything from the couple’s cake (lemon elderflower, FYI), to their invitations, which publicly debuted this Thursday. While the cards were regal to be sure, with the three-feather badge of the Prince of Wales and gold ink featured in die-stamping, there was one detail in particular which had shrewd eyes doing a double take, as there seemed to be a typo, and a rather large one at that.

As those looking close enough might have noticed, the space allotted for Prince Harry’s name seemed to read as something else entirely: “His Royal Highness the Prince of Wales requests the pleasure of the company of ______ at the marriage of his royal highness Prince Henry of Wales with Ms. Meghan Markle at St George’s Chapel, Windsor Castle on Saturday, 19th May 2018 at 12 noon followed by a reception at Windsor Castle.”

That’s right! Fret not, though, royal enthusiasts: Printmaker Lottie Small knows her stuff. The younger son of Princess Diana and Prince was actually given the name Henry Charles Albert David Mountbatten-Windsor at birth. Despite the fact that we’ve know him as Prince Harry since… well, forever, it’s merely a nickname that reportedly stuck in childhood.

Markle, by contrast, did NOT opt to use her real name, which isn’t Meghan at all, but rather Rachel (Meghan is her middle name). Her title was kept formal, however, with the “Ms.” reportedly chosen to reflect the fact that she is a divorcée.

Other chatter surrounding the invites seemed to stem from the fact that its tone differed slightly from that of Prince William and Kate Middleton’s.

As some have pointed out, Lord Chamberlain was commanded by the Queen to request guests’ presence, where Prince Charles merely requested it.

The reasoning is anyone’s guess, but some speculate it may have to do with the royal rank of the two princes.

Did you know Harry’s real name wasn’t Harry? Sound off over @BritandCo.

Nicole Briese
Nicole is the weekend editor for Brit + Co who loves bringing you all the latest buzz. When she's not busy typing away into the wee hours, you can usually find her canoodling with her fur babies, rooting around in a bookstore, or rocking out at a concert of some sort (Guns N' Roses forever!). Check out all her latest musings and past work at nicolebjean.com.
Celebrities
Celebrity News
Celebrities Celebrity Couples Royal Family Typography Weddings
More From Celebrity News