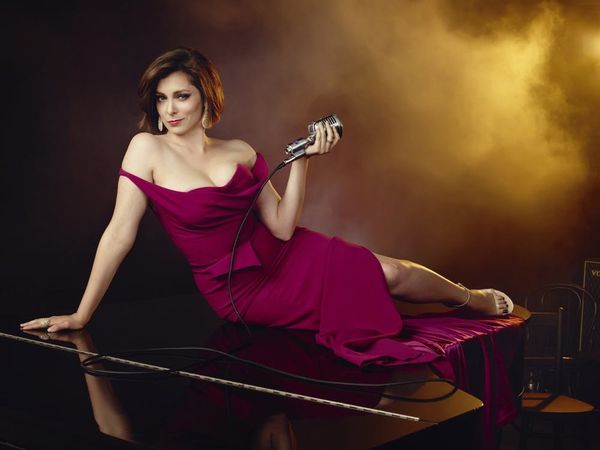 Welcome to Brit + Co’s Weekly Entertainment Planner! Each Monday, we highlight one thing we’re excited about in six categories — movies, TV, music, streaming services, podcasts, and a bonus pick from all of the above — to help you navigate your week in watching and listening. Check out our picks for the week of April 1 to 5 below. Your eyes and your ears will thank us!

Shazam! (April 5): Zachary Levi — who most recently played Midge’s rebound love interest on The Marvelous Mrs. Maisel — stars as DC Comics’ Shazam, the alter ego of a world-weary 14-year-old foster child (Asher Angel) who finds he can turn into the superhero at will. The lighthearted flick is a feel-good feature for all ages, with infectious humor that’s juvenile (but doesn’t go quite as far as, say, Deadpool). (Photo via Steve Wilkie/DC Comics/Warner Bros. Pictures)

Crazy Ex-Girlfriend series finale (April 5): It’s the end of the road for Rachel Bloom’s oddball musical comedy, a show unlike anything else on TV. Just thinking about it makes us miss it. Fortunately for us, it’s going out in a big way on Friday, April 5, with It’s Really Us Singing: The Crazy Ex-Girlfriend Concert Special! at 9pm ET following the 8pm ET finale. (Photo via Smallz & Raskind/The CW)

Unicorn Store (April 5): Netflix just recently announced that this quirky feature film starring Brie Larson would arrive on April 5, and it already feels like something we’ve wanted to see our whole lives. The Captain Marvel star plays a painter who, after flunking out of art school, is given the opportunity to adopt a unicorn — her most cherished childhood dream. It looks heartwarming and joyful and strange in the best way, and it just happens to be Larson’s directorial debut. (Photo via Netflix)

I’m Obsessed With This: You might have noticed that we watch a lot of the TV shows and movies Netflix has on offer, and this new podcast is a great supplement to keeping up with the latest and greatest from the streaming giant. Host Bobby Finger (of Who? Weekly themdom) chats with guests who include “fans, critics, and friends” about the titles and all the best online conversation surrounding them. A recent episode featured an interview with Queer Eye‘s Bobby Berk, Karamo Brown, and Tan France, so that’s reason enough to check it out. Listen online, or subscribe wherever you get your audio content.

54th Academy of Country Music Awards (April 7): Aside from honoring the biggest and best in country music for the year, the 54th annual ACM Awards promise a star-studded night of performances, with collaborations including Brooks & Dunn with Luke Combs, George Strait with Miranda Lambert, Kane Brown with Khalid, and more. Reba McEntire hosts, and the awards air live from the MGM Grand Garden Arena in Las Vegas on Sunday, April 7, at 8:00pm ET on CBS. (Photo via Ethan Miller/Getty Images)

Chilling Adventures of Sabrina Part 2 (April 5): When we last left Sabrina Spellman (Kiernan Shipka), the half-mortal, half-witch heroine had just signed a pact with the dark side, and now we’ll get to see her explore a whole new side of her supernatural powers. Part two of the Archie Comics series promises love triangles, dangerous spells, and a whole lot of fun. (Photo via Jeff Weddell/Netflix)