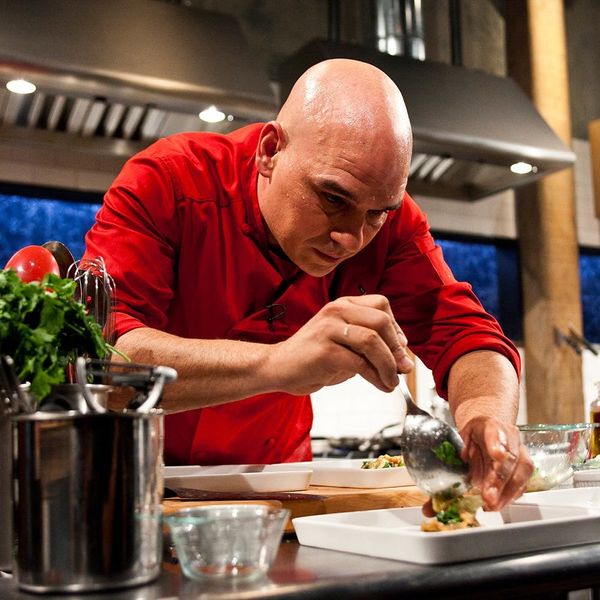 If you agree that competition is the spice of life, you’re probably a huge fan of Chopped — and probably dreading the time you’ll have to wait until the show’s new season picks back up again. But don’t worry. If high-tension kitchen situations are your bread and butter, we decided to round up some of the best shows to watch between episodes. Whether you watched Chopped for kitchen inspiration or just thrived on the competition, here are five more shows to check out immediately.

IF YOU LIKE CHEF PERSONALITIES, WATCH THE MIND OF A CHEF

If your favorite thing about Chopped was simply watching chefs do what they love most, delve further into the people behind the cooking. The fascinating series, narrated by Anthony Bourdain, profiles some of the world’s greatest chefs and why they do what they do. You can watch the documentary series on PBS. (Photo via PBS)

Few things are cooler than watching someone talk about what they love. If you were into Chopped to hear people talk all day long about food, you need to start streaming this beautifully shot series, where each episode is a stunning portrait of a chef redefining modern cuisine. The first two seasons are ready to stream now from Netflix. (Photo via Netflix)

Let’s be real: The best part of Chopped are the mouth-watering shots of food. Each episode of this show is basically one solid hour of exactly that. You can watch four hours of delicious shots now on Netflix. (Photo via Netflix)

IF YOU LIKE COOKS LEARNING NEW SKILLS, WATCH A COOK ABROAD

This series sends chefs all around the world to show off their favorite styles of cooking. It combines travel and food shows into one glorious little package that will teach you all about different culinary styles around the world. The series is available on Netflix. (Photo via BBC)

It’s totally okay to admit that the only reason you tuned into Chopped was because you live for a sense of competition. Get more high-stakes drama in this similar competition show all about mind-blowingly talented body painters. The show’s three seasons are ready to stream on Netflix. (Photo via Game Show Network)

Which other shows are you missing lately? Let us know @BritandCo!

Cailey Rizzo
Cailey is a junkie for all things pop culture. She studied journalism and English literature at SUNY Purchase, then continued studying French cinema and literature at Paris IV Sorbonne. She currently lives in New York where she can often be found singing '70s music at karaoke bars.
Streaming
Pop Culture
Streaming