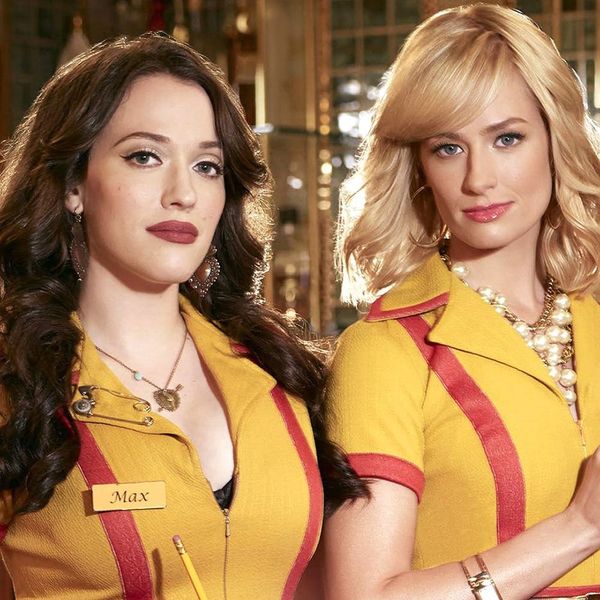 Best gal friends are unstoppable. Even when you’re completely broke, working a terrible job and just generally down on life, your closest pals are those who are gonna get you through to the end of your days. We have to give endless shout-outs to 2 Broke Girls for putting the ultimate female friendship up on a pedestal, where it belongs. But if you’re a fan of the show, you’ve probably been spending the mid-season break in agony. It will be back on air January 2, so you won’t have to wait too much longer for new episodes, but — because we consider you best friends — here are five more shows you can watch in the meantime.

When two girls are thrown together, the results are either better than ever imagined or an incredible dumpster fire. This show, starring Krysten Ritter and James Van Der Beek, some how manages to show off a friendship that’s both. It’s clever, funny and an ode to the weirdest friendships. Watch it now on Netflix. (Photo via ABC)

Anna Faris and Allison Janney star as a mother and her mother who are just trying to deal with life. It may not always go well, but it’s undoubtedly entertaining. You can watch it now via CBS. (Photo via CBS)

Whitney Cummings created this show about a couple who realize they are teetering closer and closer to complete boredom. Friendships, relationships, trying out weird new positions…nothing is off-limits for this show. You can stream it now from NBC. (Photo via NBC)

If you and your BFF feel like it’s you against the world, you NEED to watch this show about two women who may not be aging gracefully, but at least they’re aging together. You can watch Edina and Patsy’s fashion-obsessed adventures on Hulu. (Photo via BBC)

IF YOU LIKE FRIENDS BETTER THAN DATES, WATCH UNDATEABLE

Sisters before misters; friends ’til the end. No matter what, you’ve got to prioritize your best pals over somebody you’re just seeing. Or maybe that’s just a defense mechanism for people who can’t date? Watch this very funny comedy about friends who are pulling each other through their love lives, now via NBC. (Photo via NBC)