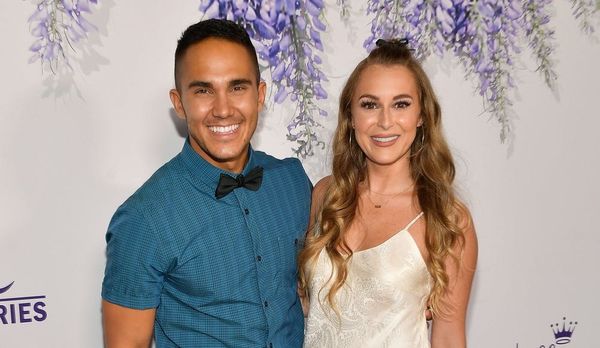 “Holy Moly!!! Guys!!! We are having another baby!!!!” Alexa shared on Instagram on Thursday, January 17, along with a photo of her and Carlos excitedly holding up a positive pregnancy test while their 2-year-old son, Ocean, sleeps soundly in his stroller.

“Do we wake Ocean up and tell him??!!” she added. “Beyond blessed and excited to continue growing this family!!! Get ready for a whole new set of adventures!!!

Carlos shared the news on his social media accounts, too. “It’s HAPPENING… AGAIN! WE’RE HAVING ANOTHER BABY!!!” he captioned a picture of him and his wife puckering up for a kiss while holding an ultrasound pic of the new baby. “Another PenaVega is joining the family! This year we will officially be able to say we have ‘kids’! Our minds are blown and we are beyond blessed and excited for our growing family!!! Let the journey begin!!!”

Alexa famously played Carmen Cortez in the Spy Kids film series and recently starred in Hallmark’s Christmas Made to Order. Carlos, who himself has appeared in several Hallmark original films, starred as Carlos Garcia on the Nickelodeon series Big Time Rush. The couple tied the knot in January 4, 2014, in Puerto Vallarta, Mexico, and welcomed their first child, Ocean, in December 2016.

The couple have not revealed any other details, such as a due date, for baby number two, but with any luck, they’ll share more details along the way as they did with Alexa’s first pregnancy. Congrats to the growing family!

Do you have any name suggestions for Ocean’s little sibling? Let us know @BritandCo!