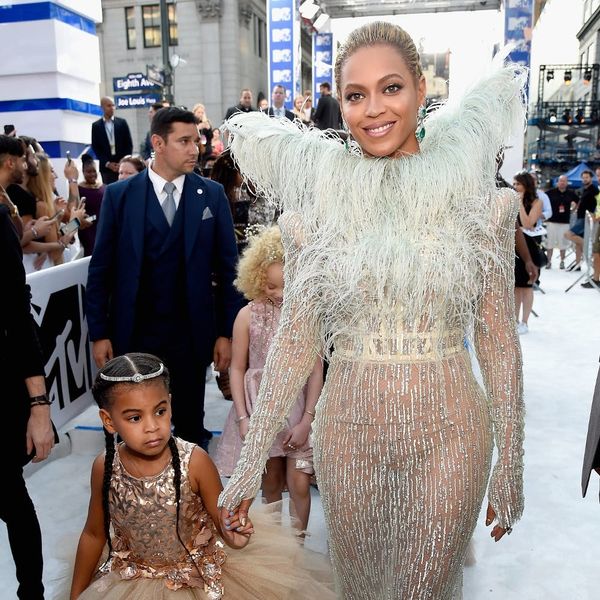 Beyoncé’s pregnancy announcement is layered with so many hidden messages and secret meanings, which we’re loving, TBH. But now it looks like there’s another stealthy level to the initial pic that you may have totally missed. That’s because Queen Bey included her little princess, Blue Ivy, in her first pregnancy pic, and chances are you’ll never guess how.

Beyoncé’s record-breaking Instagram pic (currently over nine million likes and counting) has received a heck of a lotta love and more than its fair share of shade. Posed in mismatched bra and panties with a loose veil, only Beyoncé and her baby belly (plus the news that she’s having twins) could hold their own and even outshine the massive display of flowers all around her.

And though Bey’s firstborn, Blue, appeared in the singer’s other pics, there is actually a very subtle but totally sweet tribute to the five-year-old in the very setup of the image.

Take a look at the pic again. See that bright, beautiful BLUE sky? Gorgeous. And take a moment to appreciate that floral display, including the bed of IVY Beyoncé is kneeling on. Lovely.

Stretching? Possibly. But when it comes to Bey, things are rarely coincidental.

Do you think Beyoncé meant to include Blue Ivy in the pic or is it all just a coincidence? Tweet us @BritandCo!

Desiree O
Desirée O is a ‘Professional Bohemian’ who loves anything and everything related to the arts, entertainment, and pop culture. She ADORES being a ‘Newsy’ for Brit + Co, covering all of the latest tidbits of awesomeness that you want to read about. When she’s not writing, she’s either making messy art, going on long adventurous walks with her camera, or poking around over at bohemianizm (http://www.bohemianizm.com/). You can find out about Desirée O and her work at http://DesireeO.com/ or follow her on Twitter @DesireeO.
Beyonce
Celebrity News
Beyonce Celebrity Baby