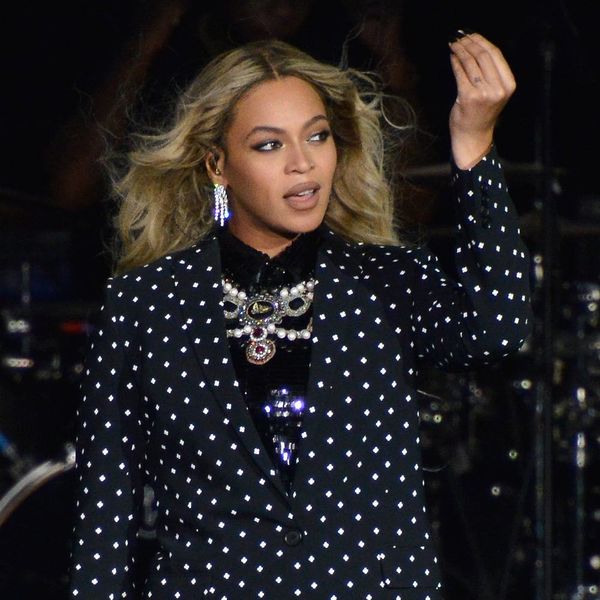 Beyoncé’s pregnancy announcement yesterday, and the delightful deet that she’s expecting twins, set the internet on fire (natch!). But this left us wondering not only how this would affect her highly anticipated Coachella performance, but whether there may have been a hidden message behind Queen Bey’s big news. And it looks like we weren’t the only ones who were spotting added layers of meaning to this highly stylized maternity photoshoot. Check out some of these totally plausible theories about Beyoncé’s now (in)famous pics.

If you think these theories are all just silly fun, we first need to consider the fact that the soon-to-be mama-of-three didn’t do anything this elaborate when she was expecting Blue Ivy. On top of that, the timing of this news has fans thinking there’s more to these pics than at first meets the eye.

What on earth is Beyoncé doing? Who is art directing these shoots and isn't it perfect timing? I smell conspiracy theory.

@Beyoncé pregnancy photos make her look like the Virgin Mary bringing us saviors. Hopefully they are are. And their birth melts trumps face.

Beyoncé: I'm the Woman, the Mother Earth, the Goddess of fertility/ Mary of the post-truth ages

beyonce and blue are literally venus and cupid but you didn't hear it from me pic.twitter.com/rLkfEs5ppN

When Beyoncé announces her pregnancy with a series of photos so rooted in art historical imagery you have to pinch yourself. pic.twitter.com/KDa1N8jjc1

Some folks think it all has to do with the Grammys…

Beyoncé at the GRAMMYS this year is gonna be even more amazing. No orange curtain dress this time B. Flaunt that bump!!!!

grammys 2017
host: and the grammy for best new artist goes to..
the chainsmokers:…
chance the rapper:…
host:…beyonce's unborn twins!!!

This pics doesn't exist yet but it's already legendary

omg imagine the beyonce album after she drop these twins

My predictions for Beyoncé:

When we hear Blue and The Twins harmonizing/crying/breathing on the next Beyoncé album pic.twitter.com/1Im8YPN6PS

And others feel like the entire sitch was set up to, well, save the day…

"Hey so there's a chance this all goes tits up, I'm gonna need you to save the nation"
Beyoncé: "I've got an idea" pic.twitter.com/UpU8wIGc5k

In another attempt to relate politics to Star Wars:

Trump is Vader
Bannon is Palpatine
Beyonce's twins are Luke&Leia and will save us all!

Land Of The Free And The Home Of The Bey (but rly plz come save us beyonce) pic.twitter.com/DN2xZIvOVv

Do you think there’s any added meaning(s) behind Beyoncé’s pregnancy pics? Tweet us @BritandCo!

Desiree O
Desirée O is a ‘Professional Bohemian’ who loves anything and everything related to the arts, entertainment, and pop culture. She ADORES being a ‘Newsy’ for Brit + Co, covering all of the latest tidbits of awesomeness that you want to read about. When she’s not writing, she’s either making messy art, going on long adventurous walks with her camera, or poking around over at bohemianizm (http://www.bohemianizm.com/). You can find out about Desirée O and her work at http://DesireeO.com/ or follow her on Twitter @DesireeO.
Beyonce
Pop Culture
Beyonce Celebrity Baby
More From Pop Culture