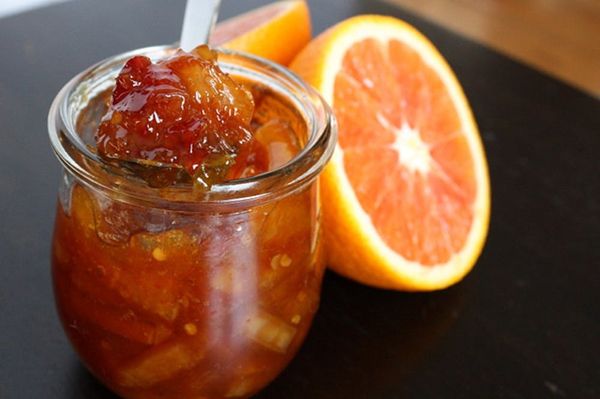 1. Blood Orange & Port Marmalade: Fruit cake, it comes with the season. We’ve got the fix –– citrus paired with the hearty flavors of port. Let’s just say, the results sleigh. (via Fieldworked)

2. Whiskey Bacon Jam: Okay, the bacon craze has been dead for a while now. But doused with whiskey, it makes a grand resurrection that’ll get your jelly completely toasted. (via Food + Words)

3. Rum Raisin Apple Pie Jam: Granny Smith and the California Raisins got together, opened a bottle of rum, and something amazing happened. If you introduce the two to a piece of cornbread, expect a regular old hootenanny. (via Serious Eats)

4. Fig Jam With Rum: Newtons have always been our favorite form of fig. Imagine what’d happen if homemade not-cookies were paired with this little number. That’s right: Minds would be blown. (via Modern Wifestyle)

5. Blackberry Vanilla Bourbon Jam: The name alone should get your heart pumping… No? Not feeling it? Better check that pulse. (via Honestly Yum)

6. Tequila Sunrise Marmalade With Orange and Pomegranate: The gallons of the classic cocktail that you sucked down during Spring Break may give you taste aversion. But trust us, one spoonful and you’ll be craving a south of the border adventure. (via Serious Eats)

7. Cara Cara Chile Marmalada With Tequila: And… because you can never have enough tequila, another option. We see future mariachi songs being written about its name. (via Local Kitchen)

8. Cherry Brandy Freezer Jam: Brandy has never been our jam (see what we did there), but turns out when you add in cherries and actually make it into jam, it instantly garners fans galore. (via Om-nom Sauce)

10. Damson Plum And Gin Jam: Here’s a lesson for you: Damson is a teeny tiny plum. And apparently the teeny tiny Damson plum packs a punch once it gets a little gin in it. (via Love & Olive Oil)

11. Frederickson Peach And Southern Comfort Jam: King Frederickson of Prussia had a major crush on preserved peaches and would taste test up to 17 jams every day before noon. Whether that’s true or not, we’ll leave you with one set-in-stone-fruit fact: This jam is delicious. (via Bluebonnets & Brownies)

12. Blueberry, Hatch Chile & Tequila Jam: Sunday mornings, reading Lucky Peach with a cup of coffee and… what’s this? A piece of dry toast? Gasp! We think not. Grab some blueberries and get on it. (via Crunchy Chicken)

13. Meyer Lemon Champagne Preserves: Since NYE is right around the corner, you’re going to want to put this jar away and save it for January 1. Think of it as a sort of hair of the dog that grandma would approve of. (via Jelly Toast)

14. Brandied Vanilla Pear Jam: Fruit might not be 100 percent fruitful in winter, but our good friend Barlette is ripe for the picking until February, meaning this recipe is calling your name. Right. Now. (via Serious Eats)

Which fruit/booze combo are you fiending for? Lay that jam down in the comments!

Lex Monson
Alexis is the co-founder of Punkpost, the app that lets you send handwritten cards (yes, handwritten by a real human) in the amount of time it takes you to send a text message. The exclusive card collections are created by a community of artists and designers and hand letter pressed on high-quality cotton paper. Get the full experience by downloading the app from the iTunes Store.
Recipes
The Conversation