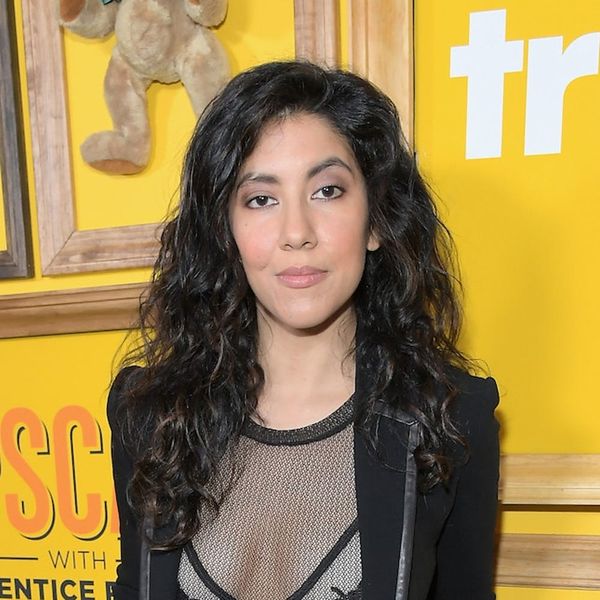 Netflix’s To the Bone has ignited many discussions about anorexia in recent months, with star Lily Collins revealing her own struggles with the illness. It’s a difficult subject for many to talk about, but it seems as though celebrities are becoming increasingly candid about their struggles, and a recent essay by Brooklyn Nine-Nine star Stephanie Beatriz about her own disordered eating is all-too relatable for many people.

Beatriz, who plays the secretly soft but tough-on-the-outside Detective Rosa Diaz on the Fox show, says her issues with food and body image are harder to define, since they don’t fit within the confines of anorexia or bulimia. “I’m what I like to call ‘a disordered eater,'” she wrote in her essay for InStyle.

Disordered eating can include compulsively eating, restricting your eating, or binge eating — or, in Beatriz’s case, all three.

“Disordered eater, I know you… You only eat certain foods that you’ve deemed ‘healthy,’ and the list of what is okay shrinks every time you read a new book or article on the subject,” she wrote. “You eat whatever you want and then spend hours at the gym as a way to counteract it… Maybe today you had green juices and a vegan burrito so now you ‘deserve’ a large pizza and chicken bites. But, f**k, that means you screwed up, so tomorrow it’s only juice all day long.”

In the past, one of Beatriz’s triggers was taking promo pics for Brooklyn Nine-Nine. In the lead-up to a photo shoot, she would become extra critical of her body, restrict her eating, and obsessively exercise. But even after achieving a set goal, she wouldn’t be satisfied, and that’s when she started to realize it wasn’t about dieting.

“I used the size of my ass and flatness of my stomach as the answer to everything that was wrong with my life and why I couldn’t seem to feel really, truly happy. … I thought by controlling what I ate I was controlling my fate, when it was ultimately controlling me.”

been doing a lot of reading on this trip about #ed and #selflove 💕🌴 @detoxfromsocialmedia recommended an amazing book, "Eating in the Light of the Moon" by Anita Johnston, PH.D. I'm so grateful to be hearing this book's amazing messages of letting go of judgements about myself. I'm learning more about listening to my intuition. As someone who is actively seeking recovery from disordered eating, I'm starting to understand how I kept myself from enjoying life by limiting what I believed was possible for me. I thought I didn't deserve to feel really happy, that I wasn't "worth it" and that I only REALLY deserved it if I was super duper skinny. Somehow if I could achieve THAT, I deserved all the good things around me, and without that I just didn't. So I stopped listening to my instincts, and I used lots of techniques to dull my feelings. but I'm not interested in anything but authenticity rn, and though I'm terrified, I'm super ready to learn more and more about who I am and to celebrate EVERYTHING about myself. mad thanks to my other gurus @jennacokerjones and @mizshawnafit for your guidance along the way, and to @frankiesbikinis for their bomb 👙 💕🌴

Beatriz says the biggest job of her life has been to teach that critical voice inside her “how to start dreaming and thinking bigger than her body size.” She has another Brooklyn Nine-Nine photo shoot coming up in a few weeks, and this time around, she’s nourishing her body instead of depriving or punishing it. “Most importantly, I’m telling myself that I am perfect and lovely just the way I am, even if I start crying as I say it,” she wrote.

“You want in on this?” Beatriz asked readers. “Take some time and talk to your own little voice. What do you think she’s trying to say when she talks about food or your body? What’s underneath all her control and fear? I bet it’s your best self, just waiting to come out. Bring her to tea; ask her what’s up. It might be damn hard to hear her real thoughts under all that nonsense, but I promise you, it’s easier than letting her, and your disordered eating, run your life.”

What do you think about Stephanie Beatriz’s essay? Let us know @BritandCo!