This Chippy Baklava Will Turn You into a Bak-Lover 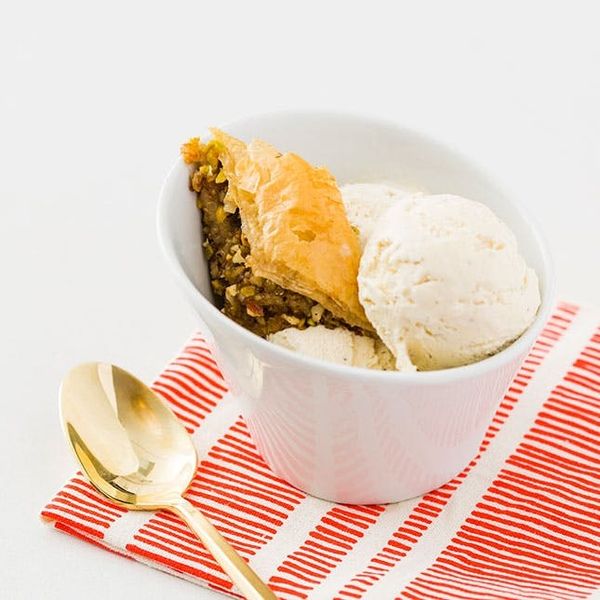 There are some desserts that fly under the radar. Take baklava, for example. It’s a divine treat that doesn’t show up that often at dinner parties or restaurants. Well, today we are working with LAY’S® Wavy chips to let baklava shine. Not only that, but we are mixing it up and adding a surprising ingredient. For an extra salty crunch, we are putting LAY’S® Wavy Original Potato Chips in our baklava recipe. Get ready, you’re going to *love* this chippy spin. The B+C team consumed our batch in minutes!

This syrup adds a hint of citrus to the sweet and salty flavor of baklava.

Grab a saucepan and your peeler.

Combine all ingredients except for the honey in a medium saucepan. Bring to a boil over medium heat, then lower heat. Simmer for about 10 minutes or until the syrup thickens.

Add the honey and cook for about two minutes. Remove from heat, strain out peels and let cool.

Though baklava might seem like an intimidating pastry, it really just takes a bit of patience. Get your pastry brush ready, because you’re about to use phyllo dough as a canvas and butter as your paint.

Remove the phyllo from the package and trim so it fits the pan. Melt your butter in the microwave in 10-second intervals. Okay, it’s go time! Get eight sheets of phyllo. Set the remaining sheets aside and cover them with wax paper and a damp towel so they don’t get dry. Lay one sheet of phyllo in the baking dish. Then brush the phyllo with a layer of melted butter. Add a second sheet and brush with butter. Add the remaining six sheets, brushing each one with butter. Pro tip: be very gentle with the phyllo. It breaks easily, but you can add in the broken pieces to make a layer. You’re going to cut into it after all.

After the eighth sheet, sprinkle half of the nut/chip mixture evenly over the phyllo. Repeat the phyllo layering process with seven sheets. Then add the rest of the nut mixture. Layer your final set of six phyllo sheets. Brush the top of the sixth layer with melted butter, and let the phyllo to set for about 10 minutes.

Then make diagonal cuts from top to bottom to create diamond shapes.

Bake your baklava until golden, about 35 to 45 minutes.

Pour the syrup over the baklava and let it set for about an hour.

In case you have leftovers (highly unlikely), store your baklava covered on the counter. Putting it in the fridge will make the phyllo soggy.

This chippy baklava is to die for! I keep getting requests for more :)

Roxy Taghavian
Roxy has been creating and executing DIY projects since her very first trip to Michael's as a child. If there's a project at hand, she'll figure out how to make it. When she's not wielding her hot glue gun, she can be found at the beach, traveling to far off lands, reading and running at her gym "The Panhandle."
Creative Potato Chip Recipes
DIY Recipes
Creative Potato Chip Recipes Dessert Recipes Sponsored
The Conversation
More From DIY Recipes