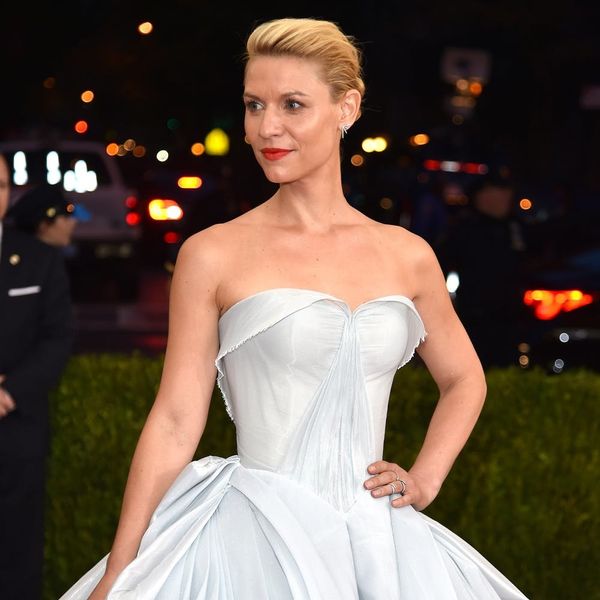 Every year, one style star tends to rise above the rest in taking home the most jaw-dropping look of the Met Gala. Last year, there was no doubt about who that star would be when Claire Danes showed up in a heart-stopping design by Zac Posen that likened her to a RL Cinderella. The gown was plenty gorgeous enough by day, but it really shone when the lights when out, as it lit up to become a glow-in-the-dark masterpiece.

Needless to say, the fashion stakes were high for a repeat performance this year, and many weren’t sure that Danes delivered. While the 38-year-old was certainly on theme for the night’s “Rei Kawakubo/Comme des Garçons,” a design house known for being nothing if not avant-garde (just see Katy Perry’s latest Vogue spread for proof), many were left feeling a little… underwhelmed by the cutout Monse blouse the actress wore with cinched-ankle pants.

Twitter was quick to go in on the Homeland star, wondering how (and why) her look changed so drastically from last year’s breathtaking gown.

how did claire danes completely kill it last year and this year its just ?????? why girl

Claire Danes went from best dressed at last year's #MetGala to rolling out of bed and taking the sheet with her this year. pic.twitter.com/PcWZExIyfP

Claire Danes had one of the best dresses last year and this one is like…girl what happened?

#ClaireDanes and #HughDancy arrive at the #metgala. She was my favorite last year but this is boring. pic.twitter.com/Sz4c3BKZdF

Typically A+ Claire Danes in #MONSE. Unamused with this mess. #MetGala #metgala2017 pic.twitter.com/7v0fNxAPzM

Many simply weren’t feeling the edgy look, comparing it to Seinfeld days of yore…

why does it look like jerry fed his puffy shirt to a dog and then let claire danes borrow it pic.twitter.com/9MimdEwTYo

Claire Danes has been in a fight for stealing Seinfeld's shirt #metgala2017 pic.twitter.com/qJXaPVDdzy

While others still thought it was a little *too* DIY-looking.

claire danes's outfit looks like she folded up some computer paper and cut a bunch of chunks out with some scissors pic.twitter.com/eEQWLGgQ7R

But others thought the look was exactly on point:

At least Katy Perry & Claire Danes are on theme. Everyone else is flopping by being safe. I thought ppl were supposed to be OTT & weird.

So far Claire Danes is my favorite #MetGala pic.twitter.com/OMZhXkrEUQ

#ClaireDanes 👌🏻 i think she's stepping it up at the fashion world from the last 3 years #good pic.twitter.com/VMTpJYRlRr

Guess the jury’s still out on this one!

What do you think of Claire’s Met Gala look? Upgrade or nah? Tell us over @BritandCo.