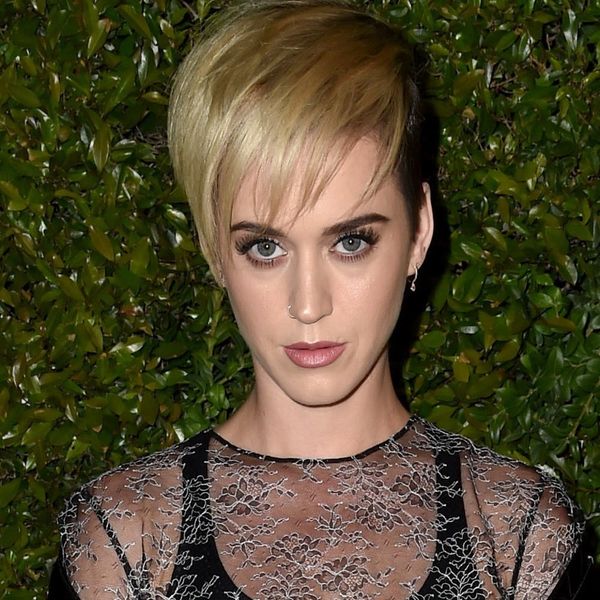 We’ve seen Katy Perry in a LOT of different looks over the years, from her bleached brows and severe updo at last year’s Met Gala to her Hillary Clinton-inspired pantsuit, but her latest cover spread for Vogue‘s May 2017 issue may have just topped them all.

Delighted to be @VogueMagazine's May cover girl wearing all Comme des Garçons. 🐣the link to the full cover story in profile.

HOW IS SHE A HUMAN BEING??EXPLAIN PLZ OR KMS I CAN'T

The spread, shot by Mert Atlas and Mac Piggott, is far more avant-garde, with sweeping, nude and black “broken bridal” gowns from the designer’s 2005 collection, insane wigs of Styrofoam and plastic, and large, structural pieces that had our jaws on the floor.

It’s a far more grown-up (if unconventional) look than we’ve seen from Perry in the past, which is perhaps utterly fitting, considering her recent style evolution. “I like more androgynous, architectural lately,” she said. (That would explain her new pixie hairstyle!)

Riding the wave of style evolution she says she’s playing witness to (“I am so encouraged by this big morph in fashion that’s happening at the moment. Everyone is shape-shifting, changing, adapting”), the “Roar” singer is doing her part to keep up. “I am pushing for my own evolution. Just making better choices as far as style goes; I don’t want to get stuck in a way of thinking or doing or presenting,” she said.

That doesn’t mean she’s ALWAYS striving to manufacture a “look,” however. Off-duty, the 32-year-old is actually pretty low-key IRL, rocking what she calls a uniform of Stan Smith sneakers and an Adidas tracksuit, all the better to fool the paparazzi.

Perry also dished on her new political wokeness, which she said was sparked after witnessing misogyny and sexism that harkened back to her youth, as well as her musical evolution. “I think you have to stand for something,” she shared. “And if you’re not standing for anything, you’re really just serving yourself, end of story.”

That means we’ll likely be hearing a lot more of “Chained to the Rhythm” and a lot less of “California Girls.” “’California Girls’ and fluffy stuff would be completely inauthentic to who I am now and what I’ve learned,” she told the mag.

It’s an evolution we’ll likely continue to see from the singer — after all, as she says, “Fashion is just a language. It’s storytelling.”

What do you think of Katy’s spread? Tell us over @BritandCo.

Nicole Briese
Nicole is the weekend editor for Brit + Co who loves bringing you all the latest buzz. When she's not busy typing away into the wee hours, you can usually find her canoodling with her fur babies, rooting around in a bookstore, or rocking out at a concert of some sort (Guns N' Roses forever!). Check out all her latest musings and past work at nicolebjean.com.
Designer
Celeb Style
Designer Katy Perry