The 9 Most OMG Moments from Couture Fashion Week 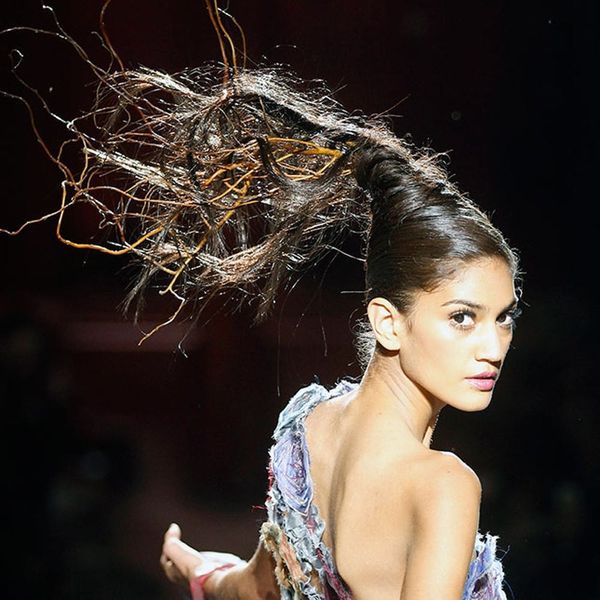 We can always count on couture catwalks to bring the drama. Add to the forward-thinking visions the amount of craftsmanship that goes into each handsewn, made-to-measure piece and it becomes very clear: the one-and-onlys you’re seeing aren’t just impressive, they’re truly spectacular. This past week in Paris was no different: from floral beanies at Chanel to bangs styled to spell out “love” at Jean Paul Gaultier, the concepts, clothing and overall looks were both brilliant and baffling. Get ready to gawk. We’ve listed the nine most OMG-worthy moments from Spring 15 couture below. Scroll through to see the best of the best alongside the most WTF pieces that walked the runways.

1. Cutouts at Atelier Versace: You saw way more than midriff at Versace, which lived up to its sexy reputation by mixing already slinky silhouettes with swirling illusion panels that made up nearly half of the majorly revealing garments. The pieces were eye popping both on and off the catwalk, where Kate Hudson previewed a dress that flashed both pelvage and some taseteful side butt. (Photo via Pascal Le Segretain/Getty)

2. Braids at Valentino: The old world feel of Valentino’s presentation dripped with romance, in part thanks to the prairie girl crown braids specked with wild flowers — a dreamy made-for-date-night ‘do that’s surprisingly DIYable. (Photos via Pascal Le Segretain/Getty)

3. Beanies at Chanel: Leave it to Karl Lagerfeld to make a winter staple work in the midst of a paper jungle dream world. Introducing the Chanel Beanie: a stunning piece of sportswear affixed with this show’s signature blooms and veil to give the playful pieces some elegant mystery. (Photo via Pascal Le Segretain/Getty)

5. Bridal Finale at Elie Saab: Delicate floral prints and lighter-than-air fabrics made the lush Elie Saab runway feel like a woodland fairytale. But the most enchanted look of all was the bridal finale, a gasp-worthy glittering gown fit for a storybook princess. (Photo via Pascal Le Segretain/Getty)

7. Pleating at Dior: There was a LOT to gawk at at Dior, from the vinyl boots and overcoats to the mondo mod-patterned body suits to these pleated dresses — each of which took 200 hours to build — that bounced down the runway with a life of their own. (Photo via Pascal Le Segretain/Getty)

8. Branches Hair at Franck Sorbier: Talk about unruly roots. The hair accessories at Franck Sorbier jutted out through tornado-blown beehives, a look that tied Dior’s “bondage ponytails” for harshest hair accessory at couture week. Other notable hairstyles had a more ethereal feel like feather hair extensions at Alexis Mabille, glitter hair at Maison Margiela, and bouquets of lilies adornment at JPG. (Photo via Thierry Chesnot/Getty)

9. That Overall Beekeeper Ballgown at Jean Paul Gaultier: We have to admit, this made our choice for wackiest look at couture week a really really easy one. (Photo via Lindsey Wixson/Getty)

What were your favorite moments from couture week? What gowns left you swooning, and which left you saying WTF? Tell us in the comments below.