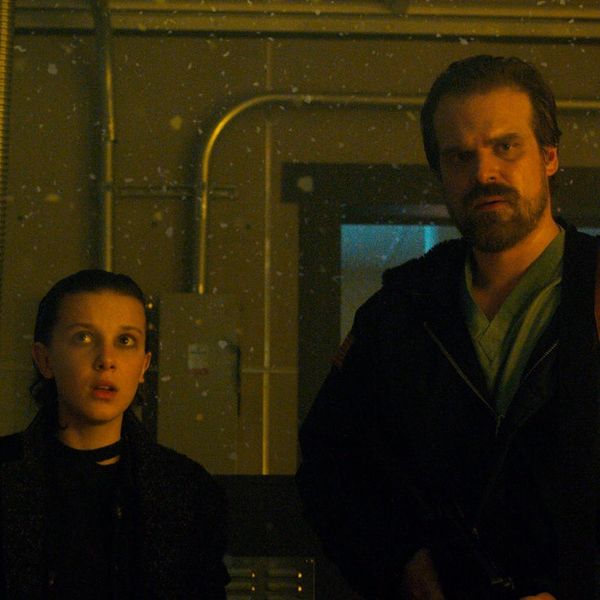 Among this morning’s 2018 Golden Globe nominations, we were thrilled to see some of our favorite stars — like Stranger Things’ own Chief Hopper, David Harbour — score some well-deserved recognition. He’s already promised something pretty amazing if he takes home the win, but the reactions to his nomination from his young costars are reason enough to feel pretty great about the situation.

After nabbing his first Golden Globe nomination for Best Supporting Actor in a Television Series (where he’s up against Alfred Molina, Christian Slater, Alexander Skarsgård, and David Thewlis), Harbour was definitely in the mood to celebrate, though he said that the real party is yet to come.

That’s right — if he wins, he’ll do the now-famous Hopper dance.

The 42-year-old further expressed his gratitude in a statement on Twitter: “Thank you HFPA for the great honor of being nominated for a supporting tv actor Golden Globe award this year, and for nominating STRANGER THINGS in the Best TV drama category as well. It’s gratifying to be seen for my work and to be in a category with such esteemed colleagues. The work I do on ST has been the most satisfying of my career, due to the brilliance of all departments but of course most especially the writing and directing of the Duffer Brothers and the directing and producing of Shawn Levy and Dan Cohen and the generous license to play that Netflix gives us.”

He went on to thank his castmates, writing, “My costars are all so inspired and inspiring to work with on a daily basis, and I surely wouldn’t be nominated without the special chemistry I had this past season with Millie [Bobby Brown], Winona [Ryder], Finn [Wolfhard], Noah [Schnapp], Sean [Astin], Paul [Reiser], and all the rest. Their work makes me shine. They make it easy for David and Hopper to look good.”

I had to go even longer than 280. If you don’t like reading, the gist is, thanks a bunch @goldenglobes for the nom.😊🥂 pic.twitter.com/xVVqWgj2k5

The love is clearly mutual. Several of Harbour’s young costars have already shared their love for the actor on social media.

Millie Bobby Brown felt nothing but joy for her friend, despite being left out of the nominations herself. “Congrats @DavidKHarbour and @Stranger_Things for the #GoldenGlobes nominations,” she tweeted, adding, “Happy days💕 #DadDance @netflix”

Noah Schnapp, who plays Will Byers, shared a pic of Harbour with the cast at Comic Con (where their admiration of him is obvious). “To our very own hero, congrats!” he captioned the photo. “We are in awe of you every day of filming #goldenglobenominee #strangerthings So proud to be a part of this group, my other family ❤️❤️”

To our very own hero, congrats! We are in awe of you everyday of filming #goldenglobenominee #strangerthings So proud to be a part of this group, my other family ❤️❤️

And Finn Wolfhard (AKA Mike Wheeler) shared his own pic with Harbour, with a note reading: “Congrats to @netflix chief law enforcement officer and to the republic of @strangerthingstv for which he stands. Thank you @goldenglobes and the HFPA. Love you David!”

Congrats to @netflix chief law enforcement officer and to the republic of @strangerthingstv for which he stands. Thank you @goldenglobes and the HFPA. Love you David!

We can’t wait to see the Stranger Things gang together when they hit the Golden Globes red carpet on January 7, 2018.

Do you think David Harbour should win the Golden Globe for Best Supporting Actor in a Television Series? Let us know @BritandCo!