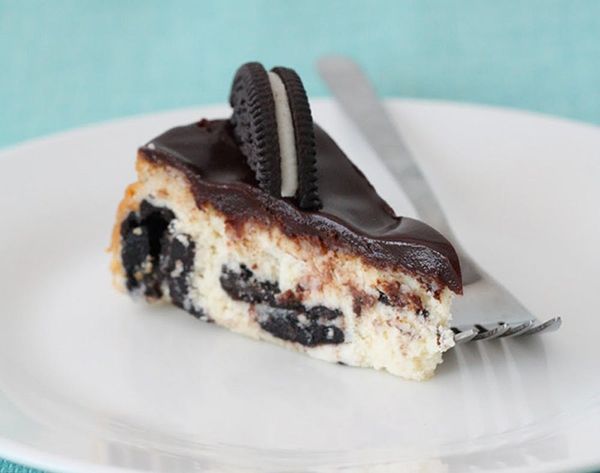 The holidays seem to trigger incredible cravings for all things sweet and decadent. And by now, it should be no surprise to admit that we’re not fighting it! Indulge with us (won’t you?) by checking out these 18 rich and creamy cheesecake recipes.

1. White Caramel Cheesecake: What could possible make a rich, white chocolate cheesecake even richer? Why a thick slathering of caramel sauce, of course! (via Not So Humble Pie)

2. Mini Eggnog Cheesecake: If you love eggnog in its natural state, then you’ll go ga-ga for these mini eggnog cheesecake bites. Take a cue from this blogger and enjoy with a side of tart cranberry puree. (via Baked by Rachel)

3. Oreo Cheesecake: This black and white Oreo cheesecake is all dressed up with nowhere to go…but our bellies! Dripping with chocolate, we dare you to to stop at just one bite. (via Bits of Sweetness)

4. Marshmallow Cheesecake: Here’s a no-bake take on a s’mores cheesecake. Just combine whipped cream cheese with a melted marshmallow-milk mix and pour into a graham cracker crust. (via Anna Dotes)

6. Gingerbread Cheesecake: Haven’t you heard? Ginger is the new pumpkin. Try this super seasonal spice in slice form with this bite-size cheesecake. (via The Intrepid Baker)

7. Candy Cane Cheesecake: This may be the ultimate holiday dessert. Crushed peppermint candies fleck the pink cheesecake filling that sits on top of a chocolate shortbread cookie crust. (via Kristin Ann Beck)

8. Butterscotch Cheesecake: Whoa, remember butterscotch? This long lost flavor (revived in the form of an instant pudding pack) is way worth revisiting, especially in this cheesecake form. (via One Perfect Bite)

9. Nutella Cheesecake: Just when you thought a no-bake Nutella cheesecake couldn’t get any more delicious, this blogger had to go and top it with chopped hazelnuts. We’re now going to say the exact same thing that this pie would say to this slice: “you complete me.” (via Munch Rat)

10. Mini Red Velvet Cheesecake: Since cream cheese is such an integral part of red velvet cake (the frosting!), it’s no surprise that red velvet cheesecake is a total no-brainer. Top with freshly sweetened whipped cream before you take a bite! (via Baked by Rachel)

12. Apple Cider Cheesecake: Warm and spicy apple cider gets a no-bake makeover with this seasonal cheesecake recipe. Absolutely serve with a scoop of vanilla ice cream! (via Mother Thyme)

13. Baked Ricotta Cheesecake: This might be the most savory cheesecake recipe in this roundup, but don’t for one second think it’s not decadent. ‘Cause cheese on cheese seems pretty indulgent to me! (via A Table for Two)

14. Maple Bacon Cheesecake: We’re still firm believers that everything’s better with bacon, so naturally, we can’t wait to dig in to this cheesecake. We love that it’s shamelessly served with a side of bacon! (via Food Network)

15. Triple Chocolate Cheesecake: Triple the chocolate, triple the fun! But that’s not all that’s going on in this dessert: sour cream keeps this sweet nice and moist, while ground espresso adds a rich kick. (via Hello Lidy)

16. Pumpkin Cheesecake: Who can pass up pumpkin cheesecake at this time of year? This is the perfect dessert to bring to a Thanksgiving potluck. (via A Life Well Lived)

18. Brown Sugar Cheesecake: We’ll end this roundup on a cheesecake that uses a natural sweetener to give it that extra umph: brown sugar! The caramel-y filling is nicely balanced by a crust made from crushed vanilla wafers and ground almonds. (via Vintage Kitchen Notes)

Will cheesecake find its way to your Thanksgiving table this holiday? What about for Christmas or New Year’s eve? What desserts do you bust out for the holidays? Talk to us in the comments below!