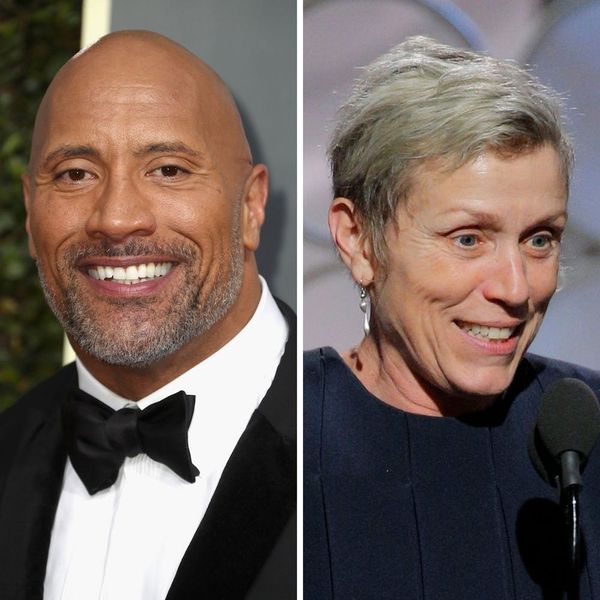 Frances McDormand’s 2018 Oscars acceptance speech was all about inclusion and equality, and it turns out she was empowering others in a much more subtle way at another awards show, too. Dwayne “The Rock” Johnson told Ellen DeGeneres that the celebrated actress made a sweet gesture to his daughter at the 2018 Golden Globes — one that, though probably unnoticed by most people, was incredibly meaningful to him.

“I’ll never forget this,” Johnson started his story on Tuesday’s episode of The Ellen DeGeneres Show. “Frances McDormand, she wins a Golden Globe … and right before she speaks, she turns around and walks to the back of the stage and shakes Simone’s hand, out of the blue. It just blew me away. No one did that, and she just had the awareness to do that to my 16-year-old daughter.”

Johnson’s daughter, Simone Garcia Johnson, was on hand as the inaugural Golden Globe Ambassador in 2018. The role was formerly known as Miss Golden Globe but was given a title change in order to highlight Hollywood children who exhibit social awareness and support various causes.

Johnson also used his Ellen appearance to thank the Three Billboards Outside Ebbing, Missouri star — while also admitting just how big of an imprint the gesture left on his heart.

“I got a little crush on Frances. … Frances, we’re gonna have to exchange numbers because just between you and I — I know nobody else is watching — we’re gonna get married,” he joked, saying that his girlfriend Lauren Hashian, with whom he’s expecting a second child, is fine with it. “It’s not gonna be weird.”

What do you think about Frances McDormand’s gesture to Simone? Let us know @BritandCo!