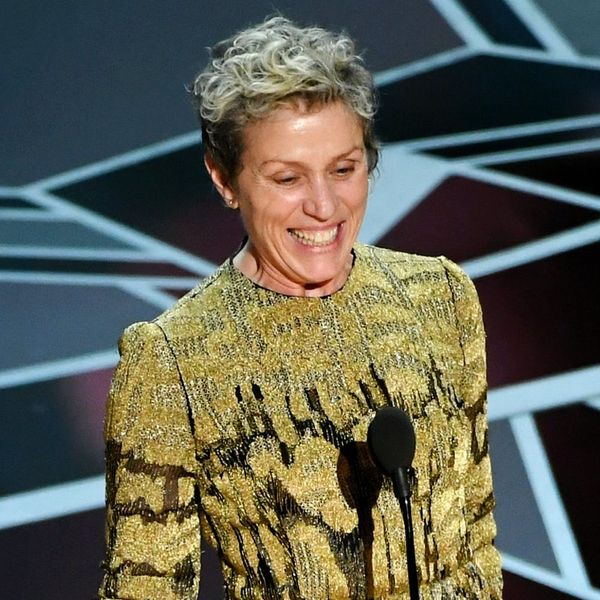 The red carpet wasn’t the only place the Time’s Up and #MeToo movements got their due at the 2018 Oscars. The Academy also dedicated a segment to equality and diversity in Hollywood during the telecast itself. But it was Frances McDormand’s Best Actress acceptance speech that truly brought women to the forefront, as she invited every female nominee from every category in LA’s Dolby Theatre to stand up for one of the most moving moments of the night.

“Look around, everybody. Look around, ladies and gentleman, because we all have stories to tell and projects we need financed,” the Three Billboards Outside Ebbing, Missouri star said after asking the women to stand in solidarity with her. “Don’t talk to us about it at the parties tonight. Invite us into your office in a couple days — or you can come to ours, whichever suits you best — and we can tell you all about them.”

McDormand, who plays a mother grieving the unsolved murder of her daughter in Three Billboards, then punctuated the moment by calling attention to another change she wants to see implemented in Hollywood. “I have two words to leave with you tonight, ladies and gentleman,” she said at the end of her speech. “Inclusion rider.”

So, what is an inclusion rider? “To everyone that does a negotiation on a film, an inclusion rider means that you can ask for and/or demand at least 50 percent diversity not only in casting but also the crew,” McDormand explained backstage, according to Variety. “The fact that I’ve just learned that…we’re not going back.”

Not unlike the way Octavia Spencer said Jessica Chastain recently used a similar clause to get her a pay increase on a collaborative project, McDormand’s call to action is another way for those with the power to do so to start forcing change to happen in Hollywood — for good.

“The whole idea of women trending…no. No trending,” the actress said backstage, stating the long-lasting impact contractual changes could have. “[It] changes now, and I think that an inclusion rider will help do that.”

What did you think of Frances McDormand’s 2018 Oscars acceptance speech? Let us know @BritandCo.