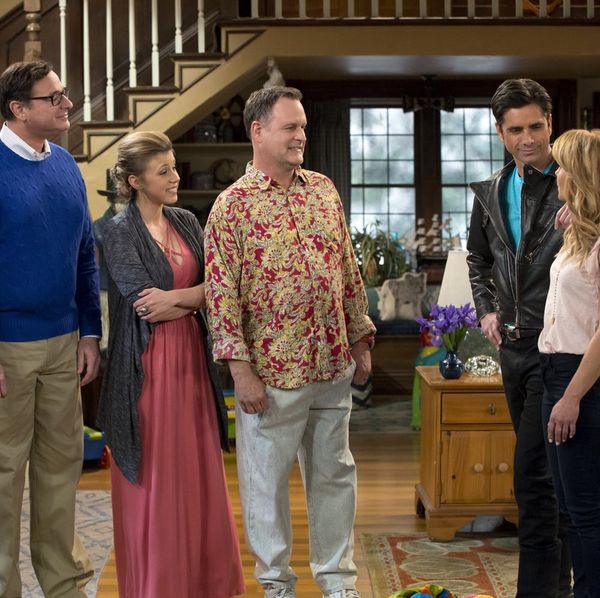 When we found out that Fuller House’s season three premiere would mark a very special occasion — the 30th anniversary of the day the Full House family first came into our lives — we knew it would be a full-on nostalgia-fest (which is just fine with us). But if this new trailer is any indication, it’s going to be even more sentimental than we expected.

“Some days it just hits me how amazing that it is that we all still live together,” DJ (Candace Cameron Bure) says while sitting on the sofa with Steph (Jodie Sweetin) and Kimmy (Andrea Barber). The convo ends with a cheeky joke (natch), but it’s obvious right from the start that this season will have plenty of adorable throwbacks to the family’s Full House days.

Case in point: Jesse (John Stamos), Joey (Dave Coulier), and Danny (Bob Saget) show up to celebrate the 30th anniversary of them becoming a family, barging into the Tanners’ San Francisco home in the very same way they did way back when AND in the very same outfits they wore on the first Full House episode in 1987 — although Jesse makes a point of saying that the other two are actually wearing bigger versions of their old outfits. No shame there, boys!

FYI: There’s still no sign of Michelle (AKA Mary-Kate Olsen and Ashley Olsen). But the rest of the family is present and accounted for — and they’re up to more than just taking trips down memory lane.

DJ is dealing with the fact that she’ll be a bridesmaid — not a bride — at Steve’s wedding (in Japan!), while also romancing her veterinarian bae, Matt. Elsewhere in the family, Steph is still dating Kimmy’s bro, and the kids are up to all kinds of goofy fun.

Check out the trailer above and prep yourself for some nostalgic fun when Fuller House season three hits Netflix on Friday, September 22.

Are you excited for season three of Fuller House? Let us know @BritandCo!

Desiree O
Desirée O is a ‘Professional Bohemian’ who loves anything and everything related to the arts, entertainment, and pop culture. She ADORES being a ‘Newsy’ for Brit + Co, covering all of the latest tidbits of awesomeness that you want to read about. When she’s not writing, she’s either making messy art, going on long adventurous walks with her camera, or poking around over at bohemianizm (http://www.bohemianizm.com/). You can find out about Desirée O and her work at http://DesireeO.com/ or follow her on Twitter @DesireeO.
Fall TV
TV
Fall TV Netflix