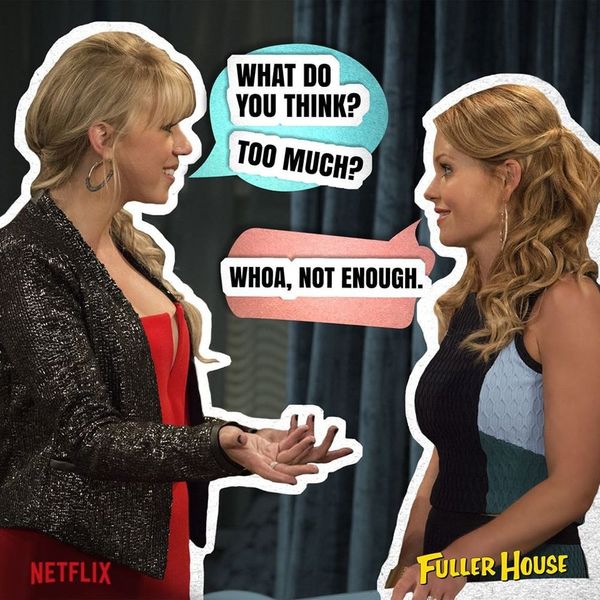 After binge-watching the entire first season in one day, we were pretty sure it was going to happen — but there was no guarantee. Today, it’s finally been confirmed, and we’re all ready to queue up Netflix for season two of Fuller House. That’s right: DJ, Steph, Kimmy and their kidlets will be back with more Tannerino awesomeness!

If you aren’t already squeeing with excitement, then let us tell you why a second season of Fuller House is so awesome.

1. DJ + Matt or DJ + Steve. How can DJ not end up with her high school sweetheart and first love? MATT! That’s how! The gorgeous vet is just too hot to handle. Who will DJ choose? We need to know!

2. Kimmy and Fernando. They were married, then separated, then engaged, then divorced, then about to marry, then engaged again. What’s next for these two who have already been on-again-off-again so many times in season one alone that our heads are still spinning?!

3. Stephanie’s Infertility. Fuller House pulled a signature Full House move by mixing some serious storylines in with the laughs. We were shocked to find out that Stephanie can’t have children, and it’s something that she’s struggling to accept, especially now that she’s living with her sister’s little ones. Although there were some tears between sisters, Steph and DJ (and us too, to be honest), there is still a lot more to explore with this topic. We’re hopeful that Fuller House will take it on, and do it justice.

4. Uncle Jesse Because Uncle Jesse. There’s no denying that John Stamos is aging like a fine wine. Okay, let’s be real: He’s FREAKING HOT! (Is that how the saying goes?! ;)) A second season of Fuller House gives us plenty of opportunities to see Uncle Jesse popping in for visits, and that’s just fine by all of us who are still crushing hard.

5. The Return of Michelle. Mary-Kate and Ashley Olsen may not have reprised their shared role of Michelle Tanner for season one, but there were plenty of mentions of the youngest sister throughout. The door is wide open for a future guest appearance. Will season two see the return of Michelle? We’ll just have to watch and find out!

Are you full of excitement for a second season of Fuller House? Tweet us @BritandCo!