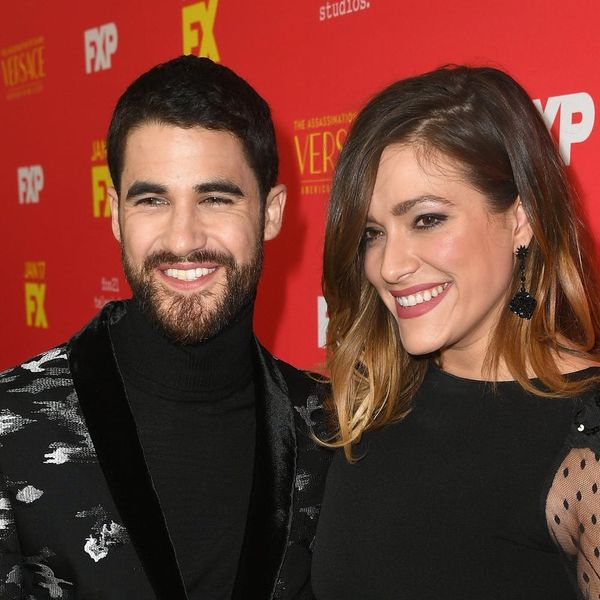 Everything’s coming up roses for former Glee star Darren Criss! Not only did his new show, The Assassination of Gianni Versace, debut with a major headline-making bang, the 30-year-old is celebrating on the personal front, as well: He’s engaged!

The actor took to Instagram to make the official announcement, revealing that he and 32-year-old writer/producer Mia Swier, his girlfriend of more than seven years, are planning to walk down the aisle.

Sharing a snap in front of what appears to be a Japanese pagoda, the actor wrote, “Mia and I have had seven and a half years of fun, wacky, wonderful, CRAZY adventures together. And I’m happy to announce that we’re kicking those adventures up a notch,” he joked of their leg placements.

Mia and I have had seven and a half years of fun, wacky, wonderful, CRAZY adventures together. And I’m happy to announce that we’re kicking those adventures up a notch. We’re goin for it. To boldly go where neither of us have gone before. Engage. 🚀💍🖖

“We’re goin’ for it,” he continued. concluding with a cheeky Star Trek reference . “To boldly go where neither of us have gone before. Engage.” 🖖

These past several weeks and have been so crazy & busy for us... really been looking forward to a fun weekend in Vegas. This is gonna be funnnn... @palazzovegas #cut #LaVidaLoca 💃🏻🕺🏻

The newly engaged couple has been exceptionally secretive about their relationship, but Criss did give a bit of insight into their dating timeline in a 2013 interview with Toronto’s KiSS 92.5, saying, “Oh yeah, we’ve been together a long time. I didn’t know I was going to be on TV when we started dating.”

We can’t wait to see if their wedding will include any low-key sci-fi references!

Congratulations to the happy couple.

What did you think of Darren’s latest role? Tweet us @BritandCo.