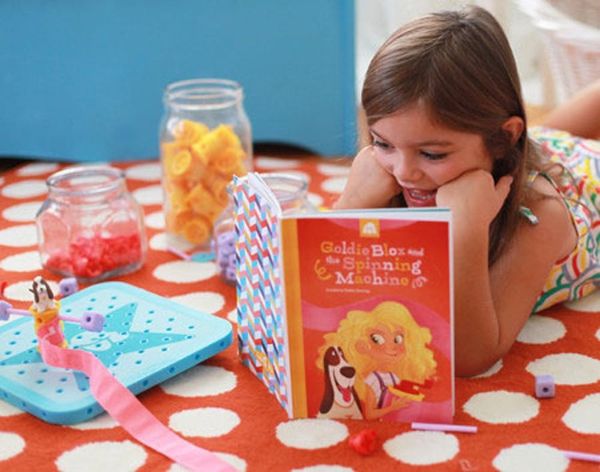 Hey, parents! There’s a new, very smart toy in the girls’ section of the toy aisle — you know, that aisle with the glittery shelves lined with everything princess in a rainbow of pink and purple hues. Well, get ready for a game changer: GoldieBlox is a unique story + construction set that aims to engage young girls and get them creating amazing things. In short, it’s setting them up to be the future engineers and the innovators of our world.

Construction toys have always been a “boy’s toy,” but GoldieBlox is ready to shake things up. Each set follows Goldie, a girly-girl with a knack for problem-solving, in a new adventure that inspires a building project. Girls ages four to nine will love the beautifully illustrated stories and the versatile building sets, which come with several design ideas. There are three titles currently available, ranging $20 to $30, and we’re hoping to see more added soon.

Debbie Steinberg is the inventor and CEO behind GoldieBlox. Debbie was one of the few women in her engineering program at Stanford and is aiming to change this shocking reality: Only 13% of engineers worldwide are women. Yikes. She set off to create a construction set from a female perspective that would boost girls’ imaginations, spacial skills and confidence. GoldieBlox launched in late 2012 with a smashing Kickstarter success that made their first set a reality (and first caught the discerning eye of The BritList ;). The following spring they won the ultra-competitive Shopify Build-A-Business Competition. With two Toy of the Year awards under their belt, it’s clear that GoldieBlox is here to stay. And play.

If you’re wondering if this toy actually inspires girls to build, we’ll let you be the judge of that. Check out the Play section of their website, where you can see what the little future engineers, ages six to eight, are currently inventing with the toy. Pretty compelling stuff!

Ready to get building with Goldie? Tell us what you think!

Teresa Lagerman
Teresa is the founder of Brooklyn Makers, a blog and online shop that celebrates the talent of local artisans. You can find her at the local markets, sipping a giant latte at a neighborhood coffee shop or out around town with her two little boys. You can quickly win her over with a good croissant.
Gifts
Parenting
Gifts Makers toys