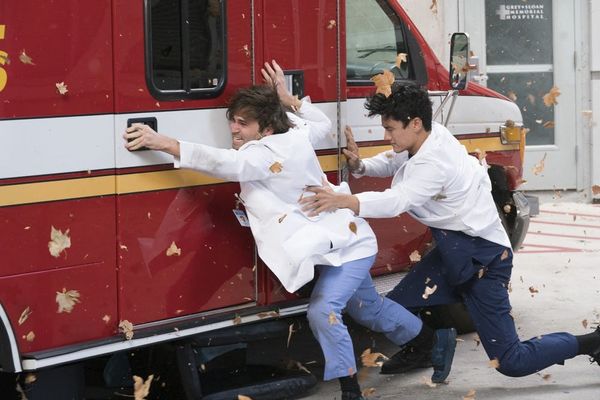 It feels like Grey’s Anatomy season 15 just got started, but the midseason finale will be here before you know it, and based on the sneak peek ABC just dropped, it looks like things at Grey Sloan hospital are about to get stormy.

In the episode, aptly titled “Blowin’ in the Wind,” a huge wind storm is set to hit Seattle. As the weather worsens, destruction occurs all over the city as structures are destroyed and debris flies through the streets, overwhelming Grey Sloan with patients.

Some of the doctors can’t help but let the adrenaline take over, ready to embrace the chaos as gurneys are wheeled by. One even refers to it as “impalement-palooza!”

As the winds howl outside, there’s plenty of drama to weather inside, too: Meredith has what looks like a serious talk with Maggie and later shares a chemistry-filled moment with DeLuca, who’s been pining for Dr. Grey since the season 14 finale.

Elsewhere in the romance department, Levi and Nico revisit the kiss they shared in a recent episode as they take shelter from the storm in an ambulance. And Teddy tries to work up the courage to tell Owen — over surgery, no less — that she’s pregnant with his child, a source of tension and secrecy that has been hanging over her head since the season premiered.

This is the last episode of Grey’s Anatomy in 2018. A midseason premiere date has not yet been announced, but it’s likely to return in January 2019. Watch the windy drama go down on Thursday, November 15, on ABC

Are you looking forward to the stormy midseason finale of Grey’s Anatomy? Let us know @BritandCo!