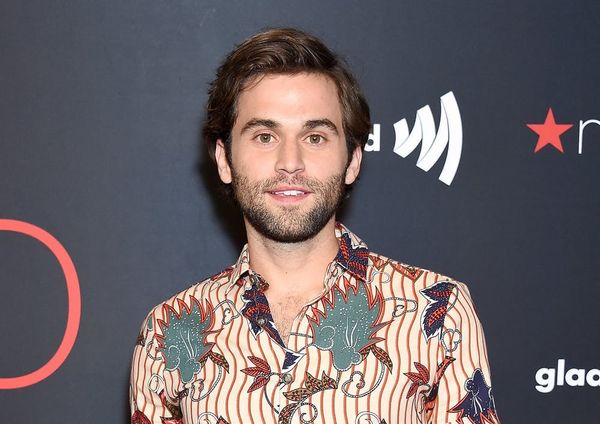 Jake Borelli never could have predicted how profoundly Grey’s Anatomy would change his life. When he booked the show two years ago — after a taped audition that led to him flying from New York to Los Angeles on a red-eye to film his first episode within hours of getting the job — all he knew about his character, Levi Schmitt, AKA “Glasses,” was that he was a “fumbly, bumbly, klutzy” newbie doctor who would end up sleeping with Dr. Wilson (Camilla Luddington).

By the end of the season 13 premiere, Levi’s first episode, fans knew all of that too. And given his disastrous first day at Grey Sloan Memorial, it seemed like maybe poor Glasses would be one of the burnouts or dropouts that Bailey and Webber always warn the interns about. But he stuck around. And both Borelli and the show are better for it.

This season, the show’s 15th, put Levi at the center of one of its biggest story lines: a romance between Dr. Schmitt and Dr. Kim (newcomer Alex Landi). Grey’s has done a lot for LGBTQ+ representation in the past, but remarkably, this is the series’ first same-sex relationship involving two male doctors.

Borelli, who himself is gay, found out about the plan for his character last summer, when showrunner Krista Vernoff called to pitch him the idea and get his thoughts. “From the get-go, she was very open and willing to hear the types of stories that I would want to tell through Levi, and the types of LGBTQ+ stories I would want to hear as an audience member,” he tells Brit + Co, adding that they also had a sit-down conversation about Levi’s character arc this season. “We talked about my own coming-out process and my experiences within the community. It was really lovely.”

Borelli was (and still is) very excited to be a part of such a significant story, but it was important to him, and to Vernoff, that they do it right. “I wanted to solidify Levi’s relationship to his own sexuality,” Borelli tells us. “For a year, because we just didn’t know enough about him and he was kind of obsessed with Jo, I and the audience assumed he was straight. So, to me, it was really important that if we were going to show this shift or this growth in his knowledge of himself, we needed to solidify the relationship he had to his sexuality in the past.”

They did so in the show’s midseason finale in November, after Levi’s flirtation with Nico finally culminated in a steamy kiss — his first with a man. Explaining that he didn’t know he was gay because sex “wasn’t on the table” for him and his friends in high school, he told Nico, “I knew that I had feelings for boys, but I didn’t understand it. Not until you kissed me. You kissed me, and I felt the opposite of shame. I felt like I existed. And everything fell into place.”

Levi and Nico’s first kiss had a profound effect on Borelli, too. The night it aired on TV, Borelli came out publicly in an Instagram post. “As a gay guy myself, tonight’s episode was so special to me,” he wrote. “This is exactly the kind of story I craved as a young gay kid growing up in Ohio, and it blows my mind that I’m able to bring life to Dr. Levi Schmitt as he begins to grapple with his own sexuality this season on Grey’s Anatomy. … To all of you who feel like little Levis out there, know that I do too, that you are seen, and that we’re all in this together.”

Borelli tells Brit + Co that he decided he wanted to share his own story with the world pretty early into filming Levi’s story, especially once he saw the reactions to Levi and Nico’s flirtation. “I started getting all of these comments from LGBTQ+ youth around the world, saying how inspired they were by the story. And this was just because of the winks and the hand-holding. [Levi] wasn’t even out yet,” he says.

“There have been so many LGBTQ+ characters over the course of the series, but we haven’t delved this deep into a gay male relationship. I knew there was going to be a dialogue around it. And if there was going to be a dialogue that I was any part of, I needed to be honest and authentic about my own story. … I wanted to continue to have that dialogue with these people who were being vulnerable themselves.”

Assuming Levi survives the windstorm from the midseason finale — those loose power lines outside the ambulance were a little ominous — that kind of open dialogue is something Borelli wants for his character, too. He cherishes moments like Levi’s speech to Nico, because he believes there’s strength in being vulnerable.

“I hope that this is sort of just the beginning of his confidence and of him really standing his ground and saying how he feels, because that’s something I really respect in people and in characters — the willingness to be vulnerable and to be honest. It’s one of the most courageous things you can do, I think. It’s also one of the hardest things to do. And he really did that. And it inspired me, and I heard from so many other people that it inspired them, too,” Borelli tells us.

“It’s overwhelming, frankly, in the most beautiful way possible. Just the courage these people are sort of sending back to me — there are no words to describe it,” he adds. “It’s life-changing. I never thought I would be in this position, and it’s really rewarding.”