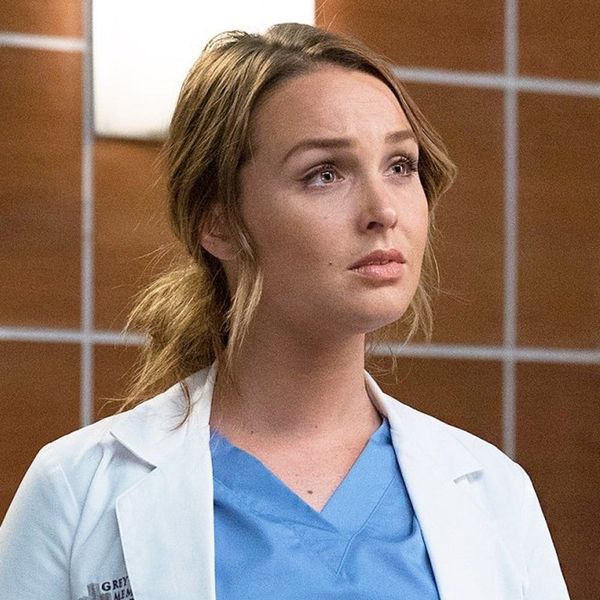 When we last left Grey’s Anatomy, Jo had come face-to-face with the one person she did not want to see: her ex-husband (and abuser) Paul Stadler. He called her by her former name (“Brooke”) and then proceeded to introduce her to his fiancée, Jenny. He’s not here to stalk her, technically — he offered to help out at the hospital during the hacking crisis (remember that whole thing?) and he’s also here to have her sign the divorce papers once and for all.

But this, of course, puts Jo in an even more precarious position. Does she tell Jenny the truth about Paul, knowing that she’s going to commit to him and his potential abuse? Or does she stay silent and suffer the regret of not being honest?

Paul wants to help Meredith with her spleen surgery, so Weber sends him in, but once Meredith realizes who he is, she gets super tense. Paul tries to convince Meredith that Jo is unstable and has her own issues, which of course Meredith doesn’t believe.

No one is happy Paul is there. Why would they be? Alex finds out and comes very close to punching him in the face, and Jo isn’t doing much better. She’s a mess, and she has every right to be.

As for the hacking crisis, that’s taken care of not by law enforcement but by Casey the intern, who revealed to Bailey that he once broke into the DMV’s computer system when they wouldn’t change the gender on his license. (Two notes: Yay for the show’s first major trans character, and can someone tell me how to do that? I need to get my license renewed soon.)

Meanwhile, Jackson and Maggie get their flirting on (as much as they can in an otherwise Jo-centric episode) but don’t end up going out for drinks because they’re interrupted by the Tinder guy Maggie forgot about. Oh, and Weber cons April into overseeing the new Harper Avery award.

Back to Jo. It’s heartening to see so many people come together to help and support her. Predictably, Jo can’t let Jenny leave without telling her what a terrible person her future husband is. Knowing that Paul is right there AND that she’s already vulnerable, and still telling Jenny like that? That takes serious guts and strength. She even gives Jenny her cell number so she can call if she needs help. Of course, Jenny tells Paul everything. In response, he tries to physically intimidate everyone, including Jo, saying he’s going to keep her number so now he has a way to contact her. Maybe it’s not surprising that when Meredith comes into the hospital the next day, she sees that Paul has been the victim of a hit-and-run.

Did Alex and Jo team up to take out Paul once and for all? Or is it a random coincidence? Jo did say she wished Paul were dead, and Alex said that he should have killed Paul when he had the chance. Supposedly we’ll find out next week, but personally, I’m here for Jo getting some justice after all this time. It’s hard to put the past behind you, but I’m rooting for the girl — and everyone else is, too.