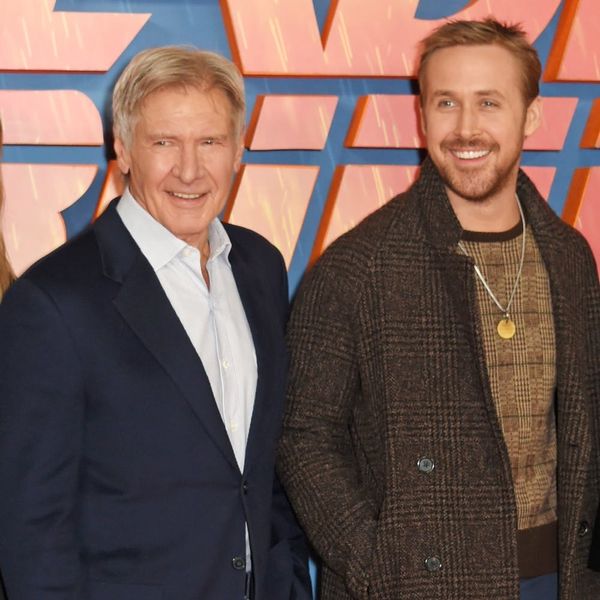 Well, here’s something to make you smile: Harrison Ford and Ryan Gosling sat down for an interview with the UK’s ITV to promote this weekend’s release of Blade Runner 2049, and it turned into a giggle fest for all involved.

The interview started with Alison Hammond telling the actors that she brought some glassware used in the original film, which prompted Gosling to ask, “Are you a fan of the original?” Hammond replied with a laugh, “Never seen it!” — and things got sillier from there.

“Bleak, dystopian… an absolute nightmare, to be honest with you — that’s just my interviewing techniques. But let’s talk about the movie,” Hammond quipped. Ford quickly picked up the joke, replying cheekily, “Cheer up. It’s a lovely day in London — let’s keep it that way. This is not the introduction we were promised. Bring me on with a little happier music.”

Gosling quickly poured himself a stiff whiskey, while Hammond and Ford traded one-liners about his salary demands. (“Show me the money!”)

The interview continued in that fashion for the full four minutes, with at least one of the three devolving into giggles every few seconds, and eventually wrapped up with Hammond admitting that she doesn’t even drink alcohol, despite the fact that they’d been sipping whiskey together.

Hammond’s interviews are well known in the UK to be less about what the stars are promoting and more about her comedic timing and absolute love of Hollywood. Other famous interviews show her getting “engaged” to Dwayne “The Rock” Johnson, testing Harry Styles’ knowledge on Shakespeare, and feeding chocolate to Hugh Jackman.