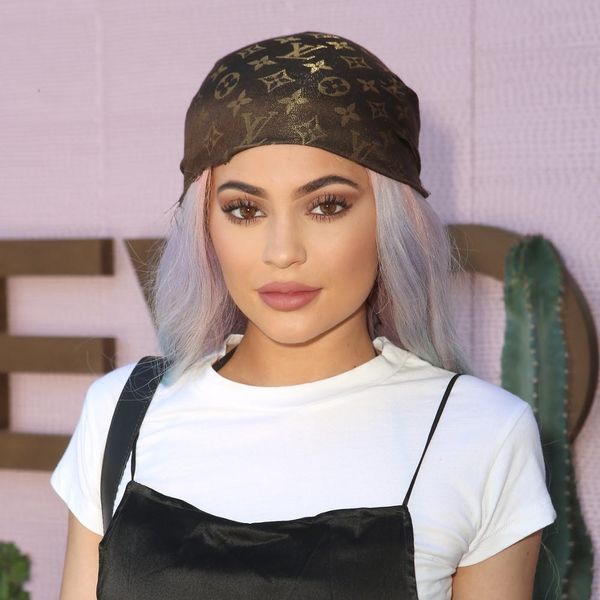 While Kylie Jenner had us focused on her newest lip kits and was giving us a glimpse at her now-cleaned GIANT diamond ring, it turns out that she might have been up to something else. We first wondered if Kylie was thinking about broadening her career-scope when she dropped this video, which many speculated featured her doing some singing. Having previously taken singing lessons and with both her bae, Tyga, and brother-in-law, Kanye, being in the biz, it wouldn’t be a huge stretch to imagine that Kylie would want to dip her toe into those waters. Though Kanye has yet to confirm those rumors, we have some pretty definitive proof that Kylie may indeed be getting into the music biz.

Pop on your detective hat and go over the clues with us.

Earlier this year, Kylie released “Glosses,” a video that was meant to be all about her lip glosses, but instead sparked plenty of buzz about who was behind the voice in the song.

The same day the video came out, the band behind the music came into existence. That’s right, before the video, there was so sign of Terror Jr., but when the video hit the world, “3 Strikes” also popped onto Soundcloud.

Along with the song on Soundcloud, Terror Jr. also popped up on Twitter for the very first time, saying, “Born.” So, now with no doubt that the band is brand new and coming into (public) existence at the very same time Kylie’s video dropped, we have even more reason to believe that Kylie is the lady responsible for the vocals. Also (and this is a biggie), the band follows just one person on Twitter: Kylie Jenner.

Why is the women’s dress on backwards? Why are the guys covering their faces? Why does the one dude have SIX FINGERS?! Ignoring the WTF-ness of this pic, we have to note that, although you can’t see the lady’s face, the pastel wig is very Kylie-like.

Back in May, V Magazine got the exclusive on the band’s third track, “Trippin’.” What was very interesting about their article, was that it mentioned the band’s lead singer, “Lisa” (yes, they put her name in quotation marks, which is totally suspicious), though the only pic offered of her was a silhouette that did its best to keep the gal’s identity a secret.

If you take a peek at Terror Jr.’s Instagram account, you’ll notice something very familiar about their latest post, which happens to be the art for their single. A pair of lips with an oceanic tongue sticking out, it’s SO Kylie-ish. Really, girl is all about those lips.

What do you think? Could this be Kylie…

Do you think Kylie is getting ready to step into the music biz? Would that be a good thing or an OMG no kinda thing? Tweet us @BritandCo!

Desiree O
Desirée O is a ‘Professional Bohemian’ who loves anything and everything related to the arts, entertainment, and pop culture. She ADORES being a ‘Newsy’ for Brit + Co, covering all of the latest tidbits of awesomeness that you want to read about. When she’s not writing, she’s either making messy art, going on long adventurous walks with her camera, or poking around over at bohemianizm (http://www.bohemianizm.com/). You can find out about Desirée O and her work at http://DesireeO.com/ or follow her on Twitter @DesireeO.
Kardashians
Pop Culture
Kardashians Lipstick Music
More From Pop Culture