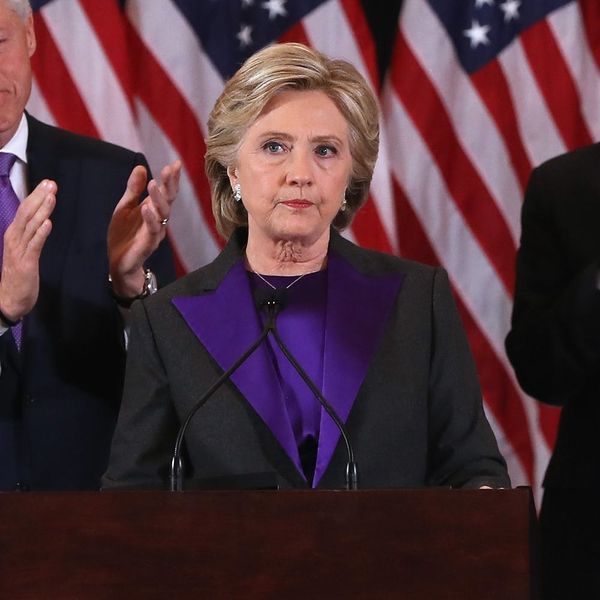 There are plenty of ways to deal with the shockwaves that are shaking up the country today — like Lady Gaga’s protest — but while we contemplate our seemingly iffy future, Hillary Clinton stood up in front of the nation to make her concession speech. While she spoke of unwavering hope and the need for action, her suit was carrying a powerful secret message.

“This is not the outcome we wanted or we worked so hard for, and I’m sorry we did not win this election for the values we share and the vision we hold for our country,” Hillary said to her heartbroken supporters.

She added, “But I feel pride and gratitude for this wonderful campaign that we built together. This vast, diverse, creative, unruly, energized campaign. You represent the best of America, and being your candidate has been one of the greatest honors of my life.” Cue the tears. Seriously, this was an epically emotional and totally worthy speech.

And while reassuring the country that we will get through this together and continue to move forward, Hillary said more than just the words many will hold so dear.

Throughout her campaign, Hillary has made subtle yet totally important statements with what she chose to wear. Her red, white and blue pant suits became one of the most recognizable symbols of her campaign and the black and purple suit she wore today was just as significant.

First, many women were celebrating the history-making moment when they were able to vote for a woman in a presidential election, by visiting the graves of suffragettes who fought so hard for our rights. Purple was a key color for the suffragette movement, and there’s a very good chance that Hillary chose to highlight this color in her outfit for just that reason — to honor the women who broke barriers before us and made Hillary’s nomination possible.

Secondly, Hillary choose not to wear blue (the color of the democratic party) and obviously wasn’t opting for red (the color of the Republican party); she choose purple, which is a combination of both colors. Could her choice of color signify a message of unity and cooperation between the two parties? Let’s hope so.

Hillary also added, “This loss hurts, but please never stop believing that fighting for what’s right is worth it.” So true. So very true.

Do you think Hillary’s suit was chosen to deliver an added message? Tweet us @BritandCo!