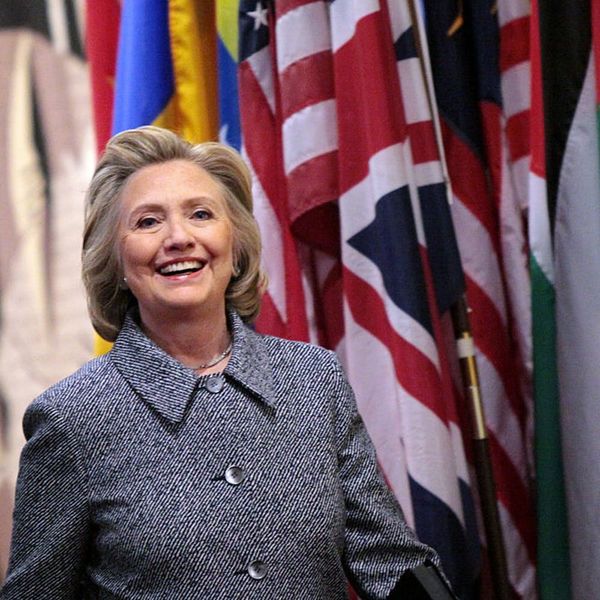 It feels like so long ago, but the presidential election actually kicked off on February 1 with the Iowa caucuses. Primary voting ended earlier this month, when Washington, DC voted on June 14. That was about a month before the Republican and Democratic conventions are scheduled, where all the delegates won through the popular vote and/or candidates appealing to the party’s establishment will cast their votes and finally, for sure, deliver us the names of the parties’ nominees for president. Holla! Right?

We’ve known for a while who we’d likely end up with: Ted Cruz was the last of Donald Trump’s rivals to stay in the race, and he dropped his bid for the Republican nomination on May 3. Bernie Sanders has yet to officially drop out, but has made it clear he is no longer seeking to convince super delegates to pledge their support to him over Hillary Clinton. But how do Hillary and Donald go from “presumptive nominees” to nominees?

Breaking down the delegate vote

This is where things get confusing, as they inevitably do in politics! And, of course, the rules are different for Dems and Republicans.

1. Democrats: This year a candidate needed to get the votes of 2,382 (from a total of 4,763) delegates. Each state offers a number of delegates bound to vote in a particular way based on the way the state’s primary vote turns out, and there are another 712 delegates allowed to support the candidate of their choice at the convention. Those are the “superdelegates,” and they can choose who to vote for regardless of popular vote, the number of states each candidate has carried, or any other metric of widespread support. They are about 15 percent of the total number of delegates, meaning that in a nail-biter of a race, they could decide the Democratic Party’s nominee.

As early as November 2015, 359 superdelegates had pledged their support to Hillary, months before any popular vote had been counted! Of course, Hillary was the front-runner even then for a number of reasons, and has since come out on top. But it is illustrative that more than half the superdelegates had decided to support a candidate, and the same candidate, before any Americans cast a vote. Superdelegates are often party insiders — a non-exhaustive list of who acts as a superdelegate: members of the national committee, members of Congress and former Democratic National Committee chairs — and said insiders typically reach a consensus very early on regarding their candidate of choice.

Why 4,763 delegates? Why not an identical amount for each state? According to the Council on Foreign Relations, “The number of delegates allocated to each state takes into account the state’s Democratic vote in the previous three presidential elections and its assigned number of Electoral College votes.”

2. Republicans: The winner of the GOP nomination must receive the votes of at least 1,237 of the 2,472 delegates at stake. While there are superdelegates on the Republican side as well, they are a much smaller group: just the three members of each state’s national committee, making up about 7 percent of the total. This year, the Republican National Committee announced it would require each state’s superdelegates to vote for the candidate who won their state.

Some states’ delegates are awarded on a winner-take-all basis, such as Delaware. Other states, such as Connecticut, use a calculation that takes into account each candidate’s placement statewide while also handing out delegates to the winner of each district.

What happens in a contested convention?

When no candidate has enough votes going into the convention to assure them of a victory (again, 2,382 for the Democrats, and 1,237 for the Republicans), they need to lobby the remaining delegates for their support. This is a contested convention, a phrase that was thrown around quite a bit before Donald Trump secured enough candidates and both John Kasich and Ted Cruz dropped out.

That won’t happen at either convention this year, though it seemed, at different times in the last six months, as though either party might be headed that way. Donald Trump has won 1,447 delegates, while Hillary Clinton has 2,218 pledged delegates and the promise of 591 superdelegates. It was a long AF process, but the nomination votes should be fairly painless.

Of course, after that, we still have three months for the general election! LUCKY US.

Do any parts of the election still make you go “WHAT?!” Let us know @BritandCo on Twitter!

Tannara Yelland
Tannara is a freelance writer and editor, an occupation perfectly suited for her affection for drinking too much coffee and keeping odd hours. She usually writes about politics, economics, and pop culture. Some day she will put to use the hundreds of hours she's spent watching Say Yes to the Dress and write THE definitive analysis of the show.
Most Recent