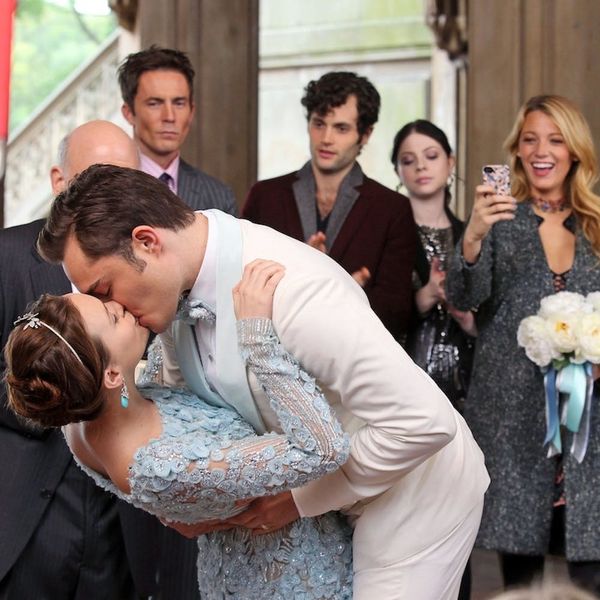 Happy tears, dancing and Champagne — there’s so much to love about weddings, even the fictional ones. Now that summer wedding season is winding down, we couldn’t help but get a little wistful. So we’re taking a walk down memory lane and highlighting our favorite throwback wedding dress moments from TV. We did some research (read: rewatched all the best wedding episodes), and we’ve got something old, something new and even something blue.

1. Amanda and Prince Michael on Dynasty: Okay, so this photo might paint a misleading portrait of what actually occurred on that fateful day, but that’s not to say that Amanda was anything short of a vision in white. This lacy gown is proof that she was total princess material. (Photo via ABC)

2. Dorothy and Lucas on The Golden Girls: Despite a dramatic turn of events right before the wedding, Dorothy still managed to look unfazed and fabulous on her big day. The lace, the pleats, the ribbon! So much to look at, and even more to love. (Photo via NBC Universal)

3. Jesse and Becky on Full House: Can we just take a moment to appreciate this veil? The embellishments know no bounds, and we’re still lovin’ it over 20 years later. Thank goodness the wedding was split into two episodes so we could give this look all of the appreciation it deserves. (Photo via ABC)

4. Topanga and Cory on Boy Meets World: Our childhood hearts melted when these two finally tied the knot. Topanga walked down the aisle in a beyond-beautiful pearly white gown featuring an off-the-shoulder neckline that could hold its own among today’s trendiest dresses. (Photo via ABC)

5. Monica, Rachel and Phoebe on Friends: Raise your hand if you’ve ever wanted to recreate this moment with your besties. After Monica becomes obsessed with rockin’ her future sister-in-law Emily’s gown, she convinced the rest of the girl gang to follow along. Who knew the best accessory for a wedding gown isn’t a tiara or a sash, but actually a cold brewski? (Photo via NBC Universal)

6. Charlotte and Trey on Sex and the City: It’s safe to say that Charlotte’s big day was not an intimate affair; it was full of pomp and circumstance and tartan, of course. She wore a princess-worthy gown designed by none other than Vera Wang. It was the perfect fairy-tale day, even if the marriage that followed wasn’t. (Photo via HBO)

7. Lucas and Peyton on One Tree Hill: Those teen TV queens really could rock a wedding dress. This empire-waisted gown was the perfect silhouette to show off Peyton’s baby bump. Classic and simple, this dress was effortlessly chic. (Photo via The CW)

8. Blair and Chuck on Gossip Girl: All series long, the writers toyed with viewers as they pitted this fiery duo against each other and then brought them back together again. And in the spirit of their dramatic relationship, they finally married at The Met (where else, right?) during the series finale. Blair stunned in a baby blue Elie Saab gown and her signature headband, of course. (Photo via The CW)

9. Bailey and Ben’s Wedding on Grey’s Anatomy: Okay, we’ll admit, there have been a lot of wedding dress moments throughout the run of this show — but we’ve always had a soft spot for Miranda Bailey’s nuptials. It was amazing to see Bailey all glammed up for once. She stunned in a sweetheart neckline and ruffles, even though she came straight from a life-or-death surgery. (Photo via ABC)

10. Pam and Jim’s Wedding on The Office: The meant-to-be couple snuck away to have their perfect ceremony on a ferry at Niagara Falls. Pam’s dress was made with crinkle chiffon and featured an empire waistline. Bonus points for being budget-friendly too! The costume designer picked it up for $399 at David’s Bridal. (Photo via NBC Universal)

11. Cece and Schmidt’s Wedding on New Girl: This will-they-won’t-they couple finally got their happy ending when Cece walked down the aisle — ahem, we mean loft hallway — in a stunning sari-inspired dress. The hybrid dress featured a white and gold strapless gown with an embroidered shawl worn on top. (Photo via Fox)

12. Marnie and Desi on Girls: Despite a hair and makeup meltdown, Marnie’s wedding look was still so perfectly Marnie — flower crown and all. The Stone Fox Bride dress featured boho lace bell sleeves and a hi-lo hem, which totally matched the folk music singer-songwriter vibe she was going for at the time. (Photo via HBO)

More wedding inspiration right this way on our Pinterest!