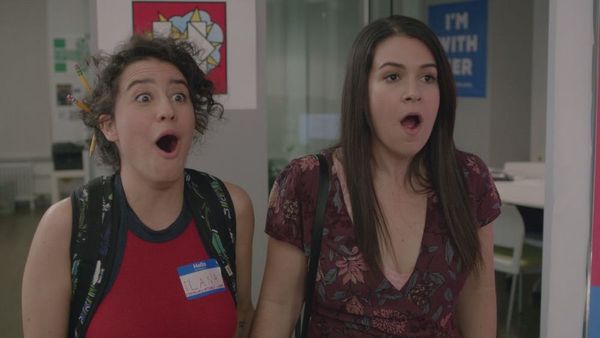 Ilana Glazer, the Queen of Broad City, is also, apparently, the Queen of pulling off an epic secret wedding. It seems Ilana and her longtime boyfriend, David Rooklin, tied the knot at New York’s City Hall sometime around February 26. And the world is slowly finding out, thanks to Instagram.

Belated congrats to these beautiful 👼🏽 on getting hitched. Love you hard and deep. You're truly #RelationshipGoals and inspire me. #YQY 📸: @chiokenassor

Congratulatory posts from Glazer’s friends have started popping up, leading some to believe there was a celebration of sorts this weekend where the marriage was announced. David is a postdoctoral research scientist who specializes in molecular modeling at New York University, and they’ve been together for at least three years.

Ilana hasn’t posted anything about the wedding, and neither has her co-star and best friend Abbi Jacobson who, we assume, had to have been a part of the celebrations. But they have been posting up a storm about the upcoming season of Broad City, set to air sometime in August 2017, and according Instagram, Ilana is even directing an episode herself.

Cutest director in the biz.

As far as wedding gifts, it’s pretty safe to assume she’s registered at Bed, Bath and Beyond, right?

No really, what’s the perfect wedding present for our girl, Ilana? Tweet us @BritandCo!

Amanda Buckiewicz
Amanda Buckiewicz is a TV producer and writer based out of Toronto. Her claim to fame is producing live interviews with astronauts on the International Space Station, and getting beat up by a bunch of aerial Asian Carp. She spends a lot of time worrying about climate change, shark conservation, and where to find the best moisturizer for her combination skin.
Celebrity Wedding
Celebrity News
Celebrity Wedding
More From Celebrity News