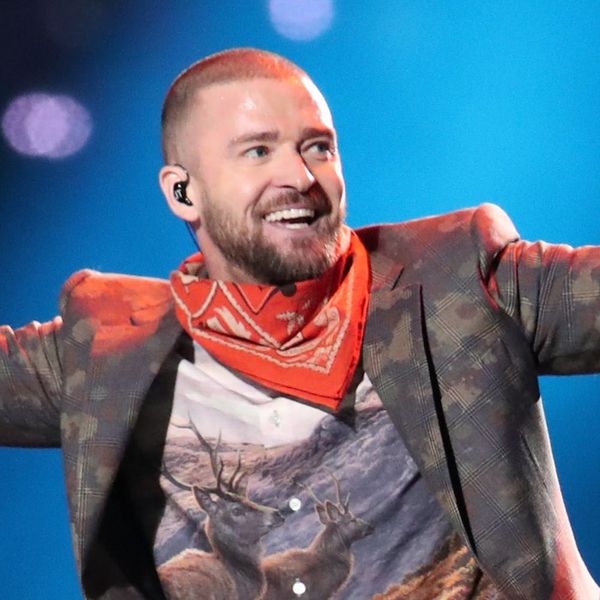 Justin Timberlake pulled out all the stops for his 2018 Super Bowl Halftime Show, with a marching band, hundreds of dancers, and even a giant projection of Prince, whose hometown of Minneapolis, Minnesota, played host to this year’s big game at US Bank Stadium.

The “Man of the Woods” singer (along with his band, The Tennessee Kids) began his set with “Filthy” and some older favorites — “Rock Your Body,” “Señorita,” “Sexyback,” “My Love,” and “Cry Me a River” — before taking the field with a full marching band to perform “Suit and Tie.” From there he switched gears, settling in at a piano to sing a few bars of “Until the End of Time,” which led right into his Prince tribute.

'Minneapolis, Minnesota, this one's for you.' pic.twitter.com/1L0RJMJOgY

With a larger-than-life image of the late musical icon projected onto a banner behind him, Timberlake sang along to “I Would Die 4 U,” as Prince’s “love symbol” lit up the area around the stadium .

An honor fit for a Prince. pic.twitter.com/EjsGPhOYiG

After giving a special shout-out to Minneapolis, the former boy bander changed things up again, welcoming literally hundreds of backup dancers onto the field for a performance of “Mirrors,” with — what else? — actual mirrors. The dancers stayed for “Can’t Stop the Feeling,” as Timberlake headed into the crowd for a few selfies.

Reactions to the show — and particularly to the Prince tribute — were mixed on Twitter, with many critics citing an interview Prince did in 1998, in which he said he hated the idea of using high-tech special effects to perform with someone from another era. Other people loved the performance, though, and were excited to hear so many of JT’s older hits.

Timberlake previously teased the performance in a press conference, telling reporters, “I had a ton of grand ideas about special guests, from ‘N SYNC to [JAY-Z] to Chris Stapleton to Janet [Jackson]. But this year…my band, The Tennessee Kids, I feel like they’re my special guests, and I’m excited to rock the stage.”

He added: “Without giving too much away, we’re doing a few things with this halftime show that they’ve never quite done before.”

What did you think of Justin Timberlake’s halftime show? Tell us @BritandCo.