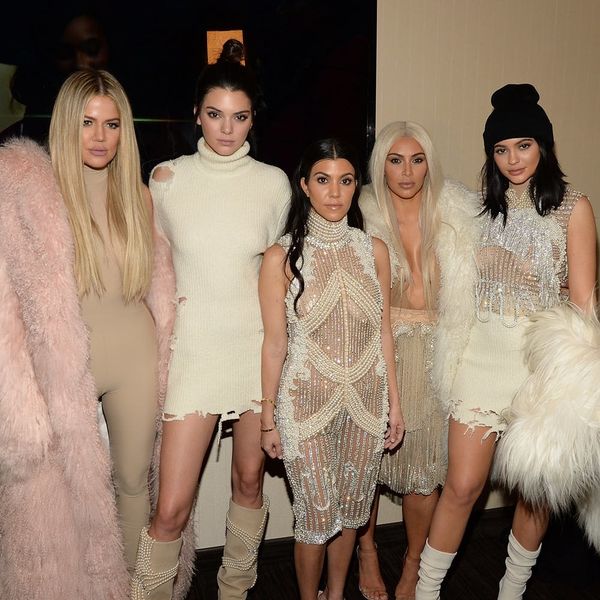 After teasing fans for most of December with outtakes from the family’s annual holiday card photo shoot, Kim Kardashian West revealed the *final* picture in her “25 Days of Christmas” series on Christmas day. Given all the build-up to the big moment, fans speculated that the last photo would be a special one, and that Kylie Jenner — who is rumored to be pregnant — would make her first appearance, since she wasn’t in any of the teaser shots. But what fans expected isn’t what they got.

In the past, the Kardashian-Jenners have rocked black-tie attire and dramatic poses for their annual Christmas photo, although their cutest card was probably 2015’s, which featured the first four grandkids, Mason, Penelope, North, and Reign. This year’s card was a bit of a departure for the family, as it showed them in a much more casual, candid setting.

The final photo — which Kardashian West captioned, “DAY 25 MERRY CHRISTMAS” — featured the KarJenner ladies, sans Kylie, and the kids, all in matching denim and white tops. No significant others, and no Rob Kardashian. Just four of the five sisters, momager Kris Jenner, her mother MJ, and the six little ones, against a stark white background with a bare Christmas tree.

Fans were not happy with the reveal, mostly because they expected something epic — like Kylie confirming her rumored pregnancy.

no I didn’t spend my day constantly refreshing my Instagram to see the Kardashian’s Christmas card and no I am not upset Kylie isn’t in it and didn’t announce if she’s pregnant or not but I also sit on a throne of lies so🤷🏻‍♀️ pic.twitter.com/0wHZKXqoWP

We have a few theories about why Kylie isn't in the Kardashian Christmas card. Read here: https://t.co/HwRSIGxD86 pic.twitter.com/MVB9eXYzRI

There were a lot of memes, natch.

I am much more disappointed than I care to admit 🙄

Kylie has stayed pretty quiet on social media in recent weeks, but the 20-year-old makeup mogul did share her final magazine cover of the year on Instagram yesterday. Her cover shot for Love magazine was snapped by big sis Kendall, and her interview inside was done by mom Kris Jenner.

What do you think of the Kardashian Jenner family Christmas snap? Let us know @BritandCo!

Kat Armstrong
Kat has been a writer, social media maven and mom for longer than she's willing to admit. She's also spent time in front of and behind the camera, interviewing celebs, politicians and acting as a producer for fashion and artistic photography shoots. When she isn't writing for various orgs and publications, she's hanging with her kids, husband and French Bulldog, Peter, in Toronto, Canada.
Kardashians
Celebrity News
Kardashians