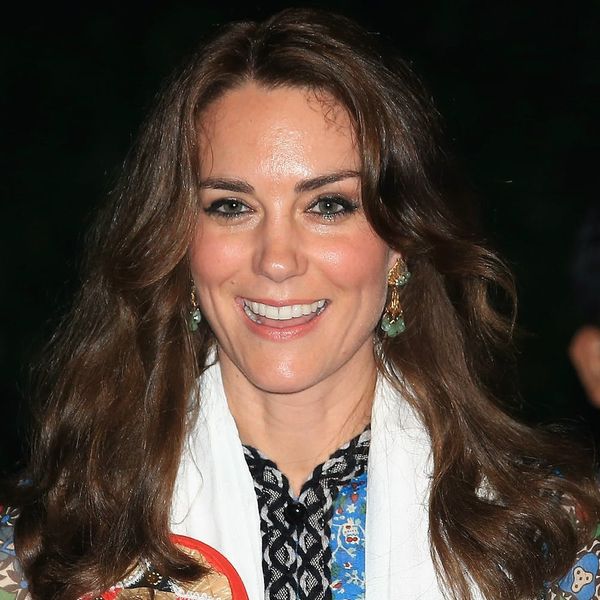 While her in-laws were busy slaying the Twitter game by throwing some hilarious shade at the Obamas, the Duchess of Cambridge has been busy making a splash of her own: Kensington Palace’s official Instagram has just announced that the royal fashion plate has been selected as the cover model for British Vogue’s 100th issue, in conjunction with the National Portrait Gallery’s coinciding museum exhibit, Vogue 100: A Century of Style (through May 22), and we. Are. Freaking. Eeee!

In this sneak peek at the pics, which were shot by photog Josh Olins in the Norfolk countryside, the Duchess is all kinds of rural chic, looking natural and fresh-faced as can be. Turns out, the Duchess was a natural, according to Olins, who said, “This was the Duchess’s first sitting for a magazine, and she was a joy to work with.”

Those lucky enough to be in London tomorrow can actually peep the shots in real time at the exhibition (a little birdie also told us that the Duchess herself will be making an in-person appearance at the exhibit on the 4 — GTFO!), while the rest of us will have to wait until the mag’s print and web (the pics will also be available for download) debut on May 5.

Two of the photographic portraits of The Duchess will be available for public view in Vogue 100: A Century of Style from Sunday 1 May. The full portfolio shoot will feature in the June centenary issue of British Vogue, available on newsstands and to download on Thursday 5 May #Vogue100

A spokesperson for The Duchess said: "Since 1916, Vogue has been a leading champion of British portraiture. The Duchess was delighted to play a part in celebrating the centenary of an institution that has given a platform to some of the most renowned photographers in this country's history. She is incredibly grateful to the team at Vogue and at the National Portrait Gallery for asking her to take part." Two of the images from the British Vogue shoot were installed this evening in the National Portrait Gallery's Vogue 100: A Century of Style. The Duchess will visit the exhibition on Wednesday 4 May and see the two portrait's on display in the gallery for the first time #Vogue100

A spokesperson for Kate has made an official statement, saying “Since 1916, Vogue has been a leading champion of British portraiture. The Duchess was delighted to play a part in celebrating the centenary of an institution that has given a platform to some of the most renowned photographers in this country’s history. She is incredibly grateful to the team at Vogue and at the National Portrait Gallery for asking her to take part.”

We, for one, could not think of a woman more worthy of the honor. You look great, Kate!

What do you think of Vogue’s centenary cover choice? Voice your thoughts to us on Twitter over @BritandCo!

Nicole Briese
Nicole is the weekend editor for Brit + Co who loves bringing you all the latest buzz. When she's not busy typing away into the wee hours, you can usually find her canoodling with her fur babies, rooting around in a bookstore, or rocking out at a concert of some sort (Guns N' Roses forever!). Check out all her latest musings and past work at nicolebjean.com.
Kate Middleton
Style News
Kate Middleton Royal Family
More From Style News