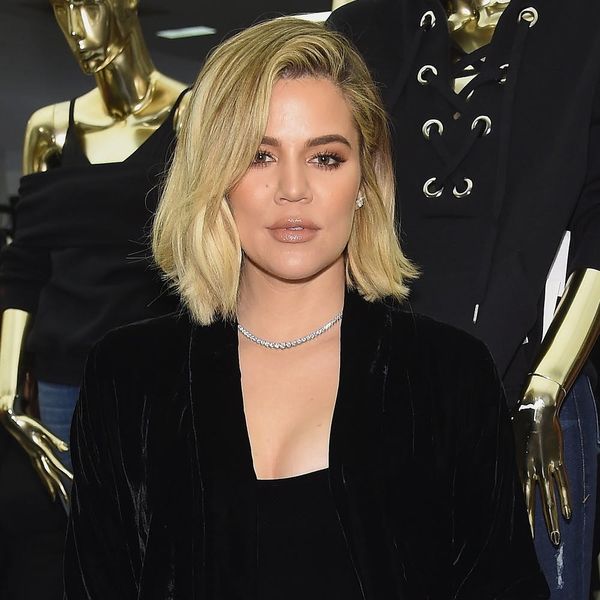 Just days after a wildly intriguing Keeping Up With the Kardashians trailer led fans to believe that Khloé Kardashian might confirm her rumored baby news on an upcoming episode of the reality series, her Snapchat followers think they may have spotted another possible hint in a picture she posted to social media.

On Sunday, the 33-year-old shared a snap of herself wearing her signature shades from DIFF Charitable Eyewear. And while the sunnies are certainly slay-worthy, it’s what appears in their reflection that has people talking.

If you look closely at the reality star’s lenses, you can see the reflection of a white U-shaped object on the floor. It could be a few different things — like a rolled-up blanket or towel — but fans think it’s a U-shaped body pillow, which is popular with pregnant women.

“Pregnancy pillows,” as they’re sometimes called, can be used to help pregnant ladies get comfortable, which can be hard to do with a growing belly, back aches, and a bladder that seems to always be full.

It’s impossible to know for sure if that’s why she has one, though — or if that’s even what’s in the photo. (Remember when her sister Kim Kardashian West faced accusations about some white marks on a marble table?)

In any case, it’s not likely that the reality star will confirm or deny fans’ suspicions, so we’ll just have to keep watching for clues as we wait for something more official.

Do you think that’s a pregnancy pillow in the reflection of Khloé Kardashian’s sunglasses? Let us know @BritandCo!