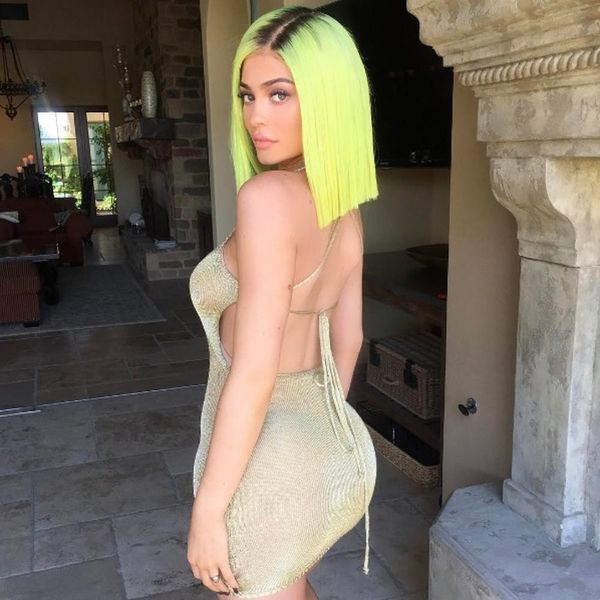 If Kylie Jenner needed some drama-filled material for her new show, The Life of Kylie, she certainly found it at Coachella this weekend, and we can only hope that cameras were rolling. Not only was the 19-year-old drawing attention with her bright AF highlighter yellow hair, but she was sparking plenty of buzz over her love life too.

The youngest Jenner sibling reportedly broke up with her on-again/off-again bae last month, but new info about the pair sparked more questions about the sitch, with fans downright confused about their relationship status. Now, it looks like things have definitely cooled off between the two, as the sitch may be heating up between the 19-year-old celeb and another musician… who just so happens to kinda sorta be Kendall Jenner’s ex.

When Kylie Jenner showed up at designer Jeremy Scott’s Moschino x Candy Crush Coachella party on Saturday at 2:45am, she arrived with hip-hop artist Travis Scott, setting tongues wagging as the pair enjoyed a VIP area, as reported by People. “Kylie and Travis made their way to a private table, where they were joined by friends and enjoyed the deejay. After five minutes of being in a very crowded space, Travis got up and left the table, and Kylie followed him out with her friends following close behind her,” a source told the mag.

And though news of a new romance for Kylie would normally be met by cheers from her adoring fans, the possible new pair is already raising some eyebrows, as another source claims that Scott previously had “a thing” with Kylie’s older sister, Kendall Jenner.

Considering Kylie’s last bae also had an, er, complicated relationship with her family (i.e. Tyga has a son with Blac Chyna, who has a daughter with Kylie’s brother, Rob Kardashian), it definitely seems like she’s not too worried about stepping on any sibling toes — especially since Kendall is now rumored to be dating A$AP Rocky. The sisters certainly didn’t seem to have any bad blood as they posed for pics the day before.

Still, with any luck, we’ll get the scoop as her new show unfolds before our eyes!

What do you think about Kylie Jenner’s possible new romance with Travis Scott? Let us know @BritandCo!

Desiree O
Desirée O is a ‘Professional Bohemian’ who loves anything and everything related to the arts, entertainment, and pop culture. She ADORES being a ‘Newsy’ for Brit + Co, covering all of the latest tidbits of awesomeness that you want to read about. When she’s not writing, she’s either making messy art, going on long adventurous walks with her camera, or poking around over at bohemianizm (http://www.bohemianizm.com/). You can find out about Desirée O and her work at http://DesireeO.com/ or follow her on Twitter @DesireeO.
Celebrity Breakups
Celebrity News
Celebrity Breakups Celebrity Couples Kardashians love
More From Celebrity News