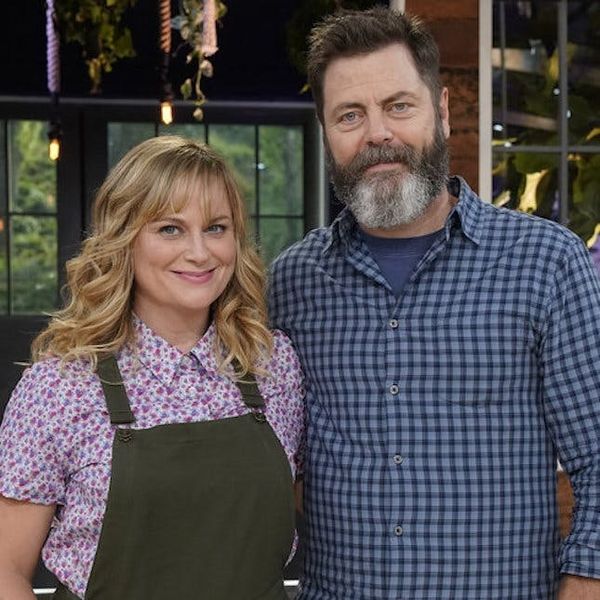 NBC's newest reality competition show is a breath of fresh air. Making It, which premiered on Tuesday, July 31, stars Parks and Recreation's Amy Poehler and Nick Offerman (who himself is an IRL master woodworker), and features eight sweet-as-can-be makers of various backgrounds and disciplines who compete in DIY crafting challenges for a grand prize of $100,000. But it isn't like most shows of its ilk — Making It is set in an an idyllic wooded setting, and lets the warmth and humor of its hosts guide the lighthearted show. It feels more like a stay at summer camp than a cutthroat competition, and if it isn't already on your current viewing schedule, read on for eight reasons why it definitely should be. (Photos via Paul Drinkwater/NBC)
Leslie and Ron are back together! Co-hosts and executive producers Amy Poehler and Nick Offerman starred as Leslie Knope and Ron Swanson on Parks and Recreation for six years. Their fictional friendship might have been one of opposites — Leslie the optimistic and faithful government employee and Ron the cynical Libertarian — but their principled idealism ultimately bonded them together, making them one of TV's best platonic pairings ever. That dynamic shines through on Making It, too. Only this time, Offerman is able to drop the hard Swanson exterior to get right on Knope — er, Poehler's — level. They're hilarious and warm and perfect, and we don't really know why they're not our best friends. (Photo via Paul Drinkwater/NBC)
Poehler and Offerman are attentive, curious, and genuine hosts. It stands that Poehler and Offerman would extend their interactions with each other to the show's contestants, too. As the makers compete in challenges, the hosts make their way to each station to ask questions about their work and their lives, or to provide support (and comic relief!) as needed. And they're always open to learning something in the process. (Photo via Paul Drinkwater/NBC)
The contestants are so supportive. We love reality TV drama and competition as much as the next person, but Making It falls in line with other, more positive reality hits such as Queer Eye and Nailed It!. The contestants often check in with each other, compliment each other's work, and even lend a hand when needed. Think The Great British Bake Off, MasterChef Junior, or Kids Baking Championship (yes, complete with all the crying). (Photo via Paul Drinkwater/NBC)
It's creatively inspiring. Some of Making It's contestants quit their jobs to be full-time makers, but even those who keep it as a hobby are so talented that it's almost not fair. Their dedication to their craft is a reminder that persistence pays off, and their creations will make you want to give it a go yourself. It's basically an interactive version of Pinterest, but with added reassurance from Poehler, Offerman, and the judges — Etsy trend expert Dayna Isom Johnson and Barneys creative ambassador Simon Doonan — that you can't fail. (Photo via Paul Drinkwater/NBC)
It oozes positivity. In the show's opening, Poehler says that "life is stressful enough" and commits to making a show that "makes you feel good." And that's exactly what she's done. At one point she even suggests that instead of voting someone off each week, they add someone new, look at nice stuff, and then all go to dinner. Making It is relentlessly upbeat, idealistic, and wholesome, full of unending compliments, happy tears, and laughter (not unlike Parks and Recreation). It feels like a warm hug, and it's exactly what we all need a little of right now. (Photo via Paul Drinkwater/NBC)
Puns. Poehler and Offerman's ongoing pun battles are as inspiring as the crafts and the makers themselves. Luckily, the show's Instagram account reposts them for your looping (and laughing) pleasure. (Photo via Paul Drinkwater/NBC)
It's cozy and comforting. Not unlike crafting itself, Making It feels almost meditative. From the promise of new supplies to the soothing colors and the satisfaction of working with one's hands, watching this show is the next best thing to going to a craft store and bringing the goods home to settle into a project yourself. (Photo via Paul Drinkwater/NBC)
It offers perspective. One of the most compelling parts of any reality show is getting to learn the contestants' backstories. On Making It, one of the makers, 54-year-old Jeffery Rudell, told the hosts how he and his family parted ways when he came out years ago. He took pride in channeling his pain into his bright, beautiful, and elaborate creative work, and his story reminded us that everyone has gone or is going through something. (Photo via Paul Drinkwater/NBC)
Nicole Villeneuve
Nicole is an entertainment and lifestyle writer covering pop culture, news, and cool women doing cool things. She likes yard sales, MTV's Teen Mom, and putting too many memes in the group chat. She lives in Toronto.
TV
TV
TV
More From TV