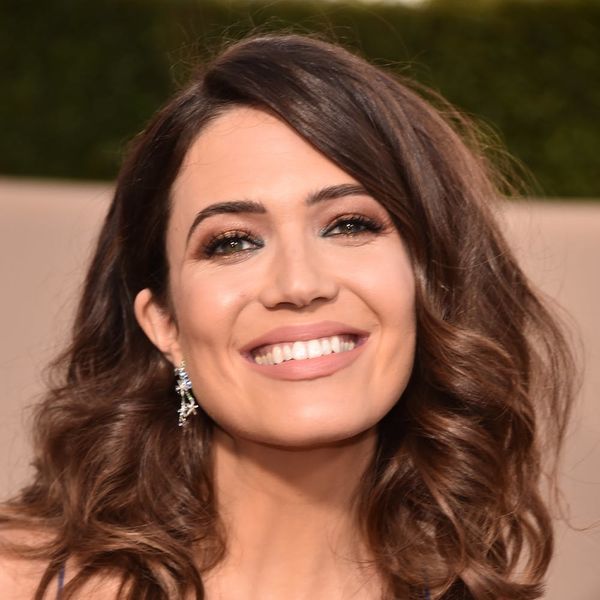 It was a good night for Mandy Moore at the SAG Awards! Not only did her show This Is Us take home the top honor for Outstanding Performance by an Ensemble in a Drama Series, but she looked positively radiant on the red carpet in a glittery blue sequin slip gown by Ralph Lauren Collection. As it turns out, the look is actually one we may have seen before: on Moore herself, 14 years earlier.

As the singer’s longtime stylist Erica Cloud revealed to People, when choosing her look for the Pearsons’ second big SAG Awards, the pair was inspired by another Ralph Lauren Collection dress that the 33-year-old wore when she was just 20 years old.

Moore attended the Los Angeles premiere of her 2004 flick Saved! in a striped white linen Ralph Lauren gown with a mermaid silhouette that was both elegant and edgy. As Cloud explained, the twosome went for a similar form this year too. “It was such a cool look then, we thought, ‘Why not revisit it now?’ It’s a beautiful, elegant silhouette,” she told the outlet.

In order to ensure a perfect recreation, the team at Ralph Lauren worked with the ladies to design sketches, even sending her the 2004 dress to try on again. “She tried it on, and it still fit her perfectly!” Cloud shared, adding, “We then made tiny changes to it, and they custom-made the sequin fabric for us and made the dress, and we got it the Friday morning before the show.”

For the star, who’s been through several reincarnations of her career between both her singing and acting gigs, the look look was “…Very symbolic of her rebirth,” according to Cloud. “For her, I think it shows she’s still herself, but just an updated version.”

Even the gown’s ocean blue hue spoke to her resurgence. “Also, the color of it is like the ocean, so it’s like a rebirth from the sea, so to speak.”

The 47 Meters Down star also played up the theme with her accessories, topping them off with starfish-inspired Niwaka earrings, a deep blue Judith Leiber clutch, and black Jimmy Choo sandals, though she traded her spray tan and a beachy chignon for simple makeup and an updated, classic ‘do of bouncy brunette curls, which Garnier stylist Ashley Striecher achieved with some Garnier Fructis Full Control Bounce Back Anti-Humidity Hairspray ($3), Sleek & Shine Anti-Humidity Aerosol Hairspray ($3), and Texture Tease Dry Touch Finishing Spray ($5).

It’s official: Moore is DEFINITELY back, and better than ever.

Which of Mandy’s looks do you love more? Let us know @BritandCo!

Arielle Tschinkel
Arielle Tschinkel is a pop culture junkie who went to NYU because the Olsen twins went to NYU (really). She is a freelance writer whose work has also been featured on HelloGiggles, Refinery29, SheKnows, Bustle, Hollywood.com, and many others; and she's living her dream one Britney Spears GIF at a time. Follow her on Twitter @mrstschinkel or visit her website at arielletschinkel.com.
Celebrities
Red Carpet
Celebrities Celebrity Style Nostalgia Red Carpet
More From Red Carpet